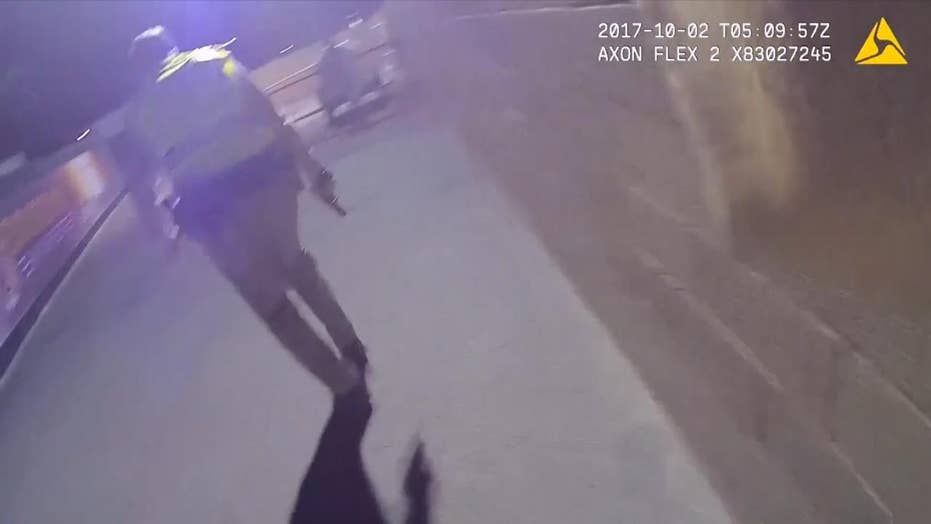 Las Vegas cops described in harrowing detail Sunday the tense 12 minutes they spent trying to breach mass murderer Stephen Paddock’s sniper lair — and the paranoia that gripped them once they were inside.

Smoke hung thick inside the room — tinged with the scent of spent gunpowder and sporadically illuminated by a blinking fire-alarm light — when officers first stepped into Mandalay Bay’s Room 32-135, where Paddock, now dead from a self-inflicted gunshot wound, spent the previous three days building his sniper’s nest, according to the cops in an interview with CBS News’ “60 Minutes.”

The sight — and the seeming impossibility that a lone man in his 60s could have caused such carnage — only intensified the officers’ paranoia as they worked to clear the hazy hotel room, they said.

“It was still very much in my brain there’s 50 other dudes in here somewhere,” Detective Matthew Donaldson recalled. “You know, we were still clearing that room, the curtains, moving the curtains. I wanted to make sure somebody wasn’t hiding between the windows and the curtains.”

Stephen Paddock in an undated photo. (Eric Paddock via AP)

They had reason to fear Paddock had help, though investigators later determined he acted alone: The first person to reach the room, Mandalay Bay security guard Jesus Campos, was met with a hail of gunfire when he had approached the door just minutes before.

By the time Paddock was done shooting at Campos, who escaped with a leg injury, the door to his room looked like “Swiss cheese,” Officer David Newton told “60 Minutes.”

Catherine Herridge has the details for 'Special Report.'

Newton and other officers coming from the floor below struggled to open a stairwell door that Paddock had jammed shut with metal shims and screws.

Then they saw his splintered door room and a nearby room-service cart with wires hanging off it, prompting fears it was booby-trapped. It was later revealed that Paddock had installed a camera on the cart to watch for anyone coming to stop him.