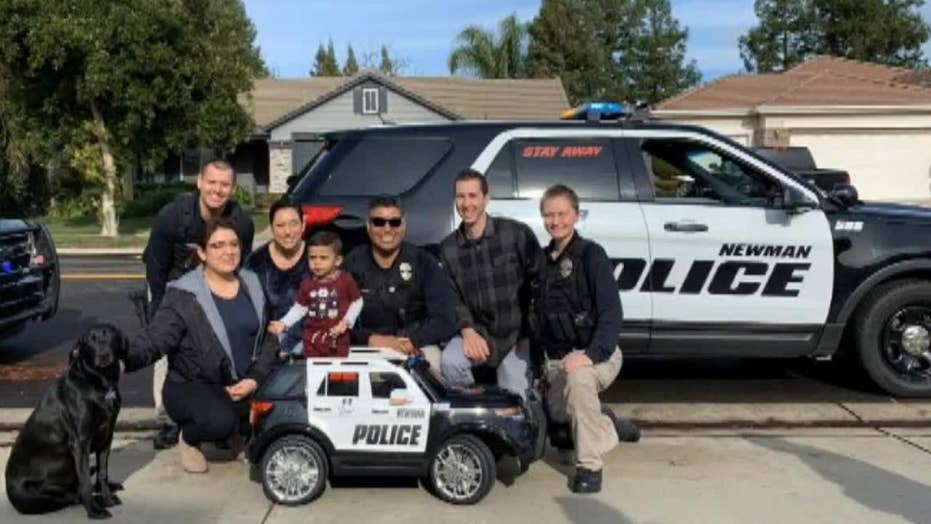 Police officers in Newman, California deliver special gift to son of fallen officer Ronil Singh on the anniversary of his death.

There were plenty of hugs and tears Monday as thousands of military families were reunited in San Diego after an extended deployment.

The USS Abraham Lincoln arrived home after a 295-day deployment - the longest since the Cold War era. It left from Norfolk, Va. on April 1, 2019 and will now dock its new homeport in Coronado, Calif., the Navy reports.

Ryan Herman, a machinist's mate on the Lincoln, met his 8-month-old daughter, Liana, for the first time in the arms of his wife, Felecia.

“I’m most looking forward to hugs — he’s always given the best hugs, and I could just cry thinking about getting one right now," Felecia told the San Diego Union-Tribune ahead of their emotional reunion.

Families were reunited with their loved ones Monday when the USS Abraham Lincoln docked in San Diego. (U.S. Naval Air Forces)

“I had to imagine what he looked like in real life,” Johnson told the Union-Tribune. “All I saw was pictures, so I was just trying to figure out what he would actually look like. I didn’t know what he smelled like or how he felt, so it’s really nice to see that.”

Originally set to arrive in October, the 3,000-person Carrier Strike Group had their deployment extended three months due to escalating tensions with Iran.

“This carrier is what kept us from going to war with Iran," Rear Adm. Michael Boyle, commander of Lincoln's Carrier Strike Group 12, said at a press conference on the pier. "The deterrence that this carrier provides allowed us to maintain peace and stability in the Middle East."

Capt. Walter Slaughter, commanding officer for the Lincoln, acknowledged the hardships that came with the long deployment, thanking the crew's families.

“We can’t do it without (their) support,” Slaughter said. “We can’t thank them enough.”