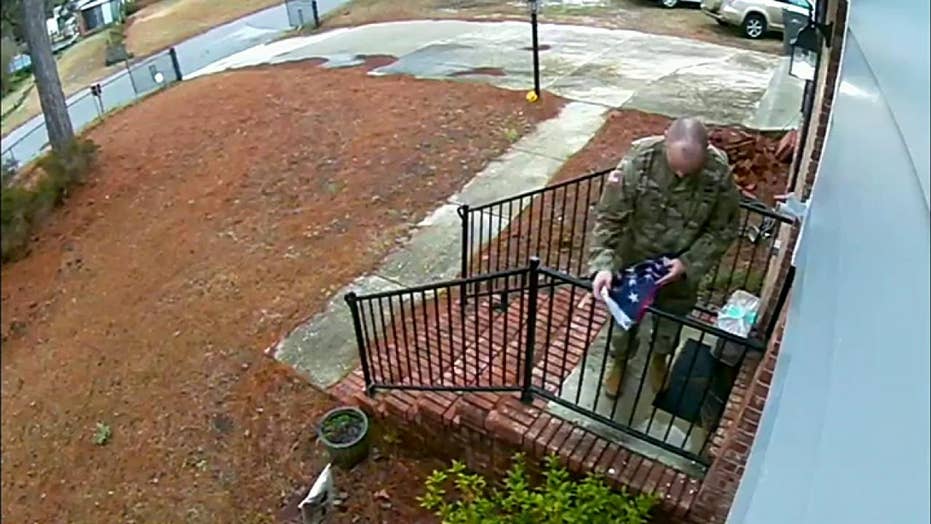 Man in military uniform folds flag torn from pole during a storm, returns it to owners' porch

The unidentified man noticed the flag on the ground and returned it to Frankie Grandstaff's porch in Hope Mills, North Carolina.

A home security camera recorded an Army soldier in North Carolina walking up to a stranger’s house and respectfully folding an American flag that came down during a storm.

Frankie Grandstaff told his Facebook followers that he was the owner of the flag and that it was torn from its pole Tuesday in Hope Mills, near Fort Bragg.

"This is how important the American Flag is to our Military!" Grandstaff said in a post the next day, accompanying the video.

Grandstaff told WTVD-TV that, "It was just very cool to see the video and actually seeing it happen at our house."

Grandstaff said he doesn’t know the soldier, who left the flag properly folded in a triangle.

"He wasn't looking for attention. He didn't even know we had the cameras, you know, he just did it because he was doing the right thing," he told the station.

Fort Bragg officials told the station they were unable to identify the soldier in the video, but confirm he's in the Army based on his uniform, WTVD reported.