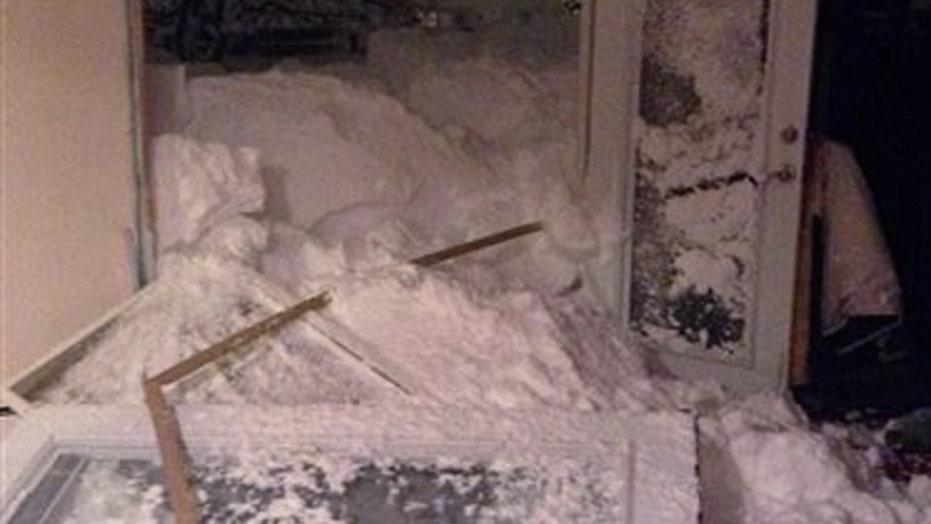 Residents across the U.S. braced for another night of icy temperatures as the mercury continued to drop Wednesday, while residents of upstate New York buried under up to five and a half feet of snow prepared for another round expected to come Thursday.

Even hardened Buffalo residents were caught off-guard Tuesday as more than 4 feet fell in parts of the city. Authorities said snow totals by Wednesday afternoon could top 6 feet in the hardest-hit areas south of Buffalo, with another storm expected to bring another 2 or 3 feet.

How snowy was it? The National Weather Service said it was so bad that some of the spotters it relies on to update accumulation totals couldn't get out of their houses to take measurements.

And that old "Neither snow nor rain ..." Postal Service motto? Mail delivery was interrupted in certain communities with driving bans.

"This is an historic event. When all is said and done, this snowstorm will break all sorts of records, and that's saying something in Buffalo," New York Gov. Andrew Cuomo said Wednesday during a visit to the city.

The storm came in so fast and furious over Lake Erie it trapped more than 100 vehicles along a 132-mile stretch of the New York State Thruway, which remained closed Wednesday. Residents who can handle 6 inches of snow as if it were a light dusting were forced to improvise.

Tom Wilson, of West Seneca, split a Salisbury steak frozen dinner with co-workers and tried his best to get some rest when he was stuck 36 hours at his warehouse job.

"I slept on a pallet. Then I slept on some office chairs, and then I went back to the pallet," he said. "Then I found some sponges to lay on. I found one pack of sponges unopened. That looks like a pillow to me."

Bethany Hojnacki went into labor at the height of the storm and ended up giving birth in a Buffalo fire station after she and her husband couldn't get to the hospital. Baby Lucy weighed in at 6 pounds, 2 ounces. Mother and child were later taken to the hospital in an ambulance.

Cuomo said Wednesday afternoon that all trapped travelers had been removed from their cars, though some truckers were staying with their rigs.

Asked by reporters how officials could allow people to be snowbound in cars for 24 hours, Cuomo cited a jackknifed trailer that prevented plows from removing fast-falling snow and drivers' own wrongheaded choices.

"What happened was, even though the Thruway was officially closed, people went on. We didn't immediately block every entrance. It was a mistake," Cuomo said.

"Part of it is citizen responsibility," he added. "If the road is closed, it's closed."

Cuomo declared a State of Emergency for counties most affected by the weather. The storm was blamed for up to seven deaths in western New York, at least four of them from heart attacks. Erie County officials said a man was discovered in his car, which was in a ditch and buried in snow 24 miles east of Buffalo. It was unclear how he died.

Amtrak passenger train service between Albany and the Buffalo area was suspended. Some service through Buffalo will be restored starting Thursday, with delays expected, Amtrak said.

Sunny skies returned to some hard-hit areas Wednesday, but workers were still trying to cart off the acres of snow. Lake-effect snow fell heavily on some northern New York areas east of Lake Ontario.

With an additional 2 to 3 feet possible by Thursday, the one-week totals for the Buffalo area will approach the average snowfall for a year: 93.6 inches, or close to 8 feet. Cuomo warned that a weekend warm-up could lead to significant flooding when the thick blanket of snow melts. Forecasters say rain is possible this weekend.

The governor said it would take four or five days to clean up.

From Hawaii to the Carolinas, Americans shivered as racing winds and icy roads caused accidents, school closings and delays in municipal operations from the Midwest to the South even where snowfall was low or mercifully absent.

Jeff Masters, meteorology director at the online site Weather Underground, told The Associated Press that the low temperatures are January-like instead of what's normal for November. Masters said temperatures were 15 to 35 degrees below average over much of the country due to the presence of arctic air.

The Buffalo Bills offered $10 an hour plus game tickets for people willing to help shovel out the stands in Ralph Wilson Stadium in Orchard Park, in the snow belt southeast of the city.

Team spokesman Scott Berchtold said the team has an estimated 220,000 tons of snow to remove from the stadium before Sunday's game against the Jets — more than ever before.

The snow was heaped so high on the roof a Cheektowaga home that when it fell, the force blew in the back door, frame and all, and filled the living room with snow.

"It was a huge crash. ... We actually thought that it was the roof coming down in the house," said Chrissy Gritzke Hazard, who was home with her husband, five children and three of her children's friends.

The lake-effect snow created a stark divide: In downtown Buffalo and north of the city, there was a mere dusting of precipitation, while in the south parts, snow was everywhere. The snow band that brought the snow was very much evident throughout the day as gray clouds persistently hovered over the southern part of the city. The band was so apparent that the wall of snow could be seen from a mile away.

State Police working with Erie County Sheriff's Dept and @NYSDEC with ATVs, Sleds, and 4WD vehicles to rescue stranded motorists on I 90.

The wintry blast that included bitter cold in spots created havoc across a wide swath of the country. In New Hampshire and elsewhere, icy roads led to accidents. Lake-effect storms in Michigan produced gale-force winds and as much as 18 inches of snow and canceled several flights at the Grand Rapids airport.

Schools closed in the North Carolina mountains amid blustery winds and ice-coated roads. In Indiana, three firefighters were hurt when a semitrailer hit a fire truck on a snowy highway.

The Weather Channel reported that relief would not reach parts of America until the weekend.