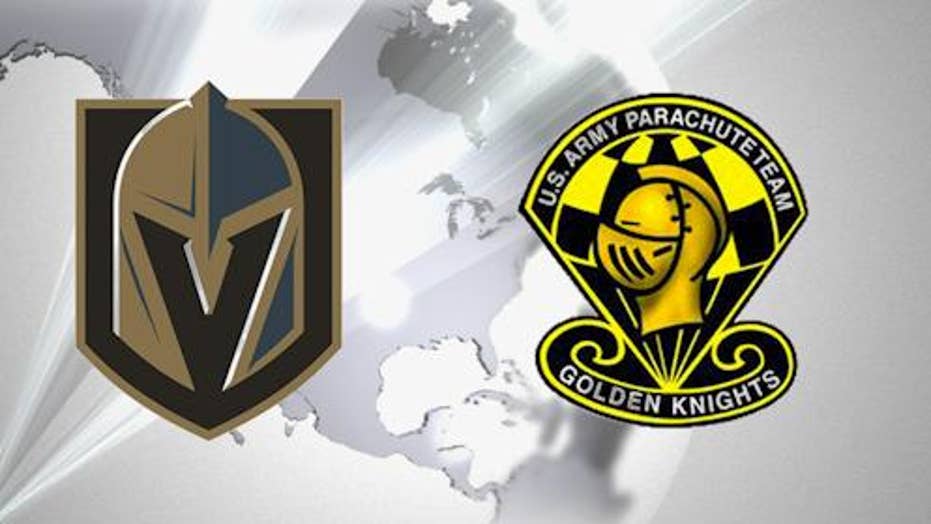 The Vegas Golden Knights hockey team is currently standing at No. 1 in the NHL western conference. It's Vegas’ first-ever professional sports team and when the name was announced in the fall of 2016 before the franchise's first season, controversy quickly followed.

The aerial demonstration parachuting team of the U.S. Army that goes by the same name did not take kindly to the naming announcement, and both entities have been embroiled in a dispute over just who can stake a claim to the name. In this case, imitation might not be the best form of flattery.

Both parties are trying to settle, since the U.S. Army filed a motion of opposition Jan. 10 in response to the hockey team's filing a trademark registration for the name. The Army does not have a trademark on the name and claims the team’s colors, gold and black, are also similar to the military variant.

“The Army and the team have been actively negotiating a "coexistence agreement" which would allow both parties to define their respective interests in their trademarks, and avoid the appearance of Army endorsement or public confusion regarding use of the Golden Knights name,” Alison Bettencourt, public affairs spokesperson for the Army Marketing and Research Group, said in a statement to Fox News.

On the issue of public confusion, it could be difficult for the Army to argue consumers would be thrown off by the same names. The hockey Golden Knights fired back in a statement released after the motion of opposition was filed saying, “Indeed, the two entities have been coexisting without any issues for over a year (along with several other Golden Knights trademark owners) and we are not aware of a single complaint from anyone attending our games that they were expecting to see the parachute team and not a professional hockey game.”

The parachuting team was founded in 1962 and has since conducted more than 16,000 shows all over the world.

NHL team owner Bill Foley is a graduate of West Point, where the mascot for sports teams there is the Black Knights. Foley wanted it to be similar and settled on the Golden Knights due to Nevada’s rich reserves of gold.

Other professional sports teams do have the same name, but tradition is their main distinction. “You look at examples, say, between baseball and hockey. You have the New York Rangers and the Texas Rangers or the Edmonton Oilers and the Houston Oilers have existed for many years in hockey and football and it’s hard to argue that there’s going to be confusion in 2018 for these names that have existed together with no issues for 40, 50, 60 years,” says Chris Creamer, founder of sportslogos.net

Talk of the hockey team changing its name is premature, and the option seems unlikely. The embarrassment that would accompany such a name change would be difficult to recover from, said Creamer.  “The league, the team will do everything they can to settle with the Army to make sure this doesn’t have the result of a name change and they could save some face with this.”

Trademark disputes happen all the time, but not usually between pro sports and the armed forces, making this a landmark case.

The hockey Golden Knights filed a request to suspend the motion of opposition proceedings, giving both parties a 90-day extension to reach a settlement.