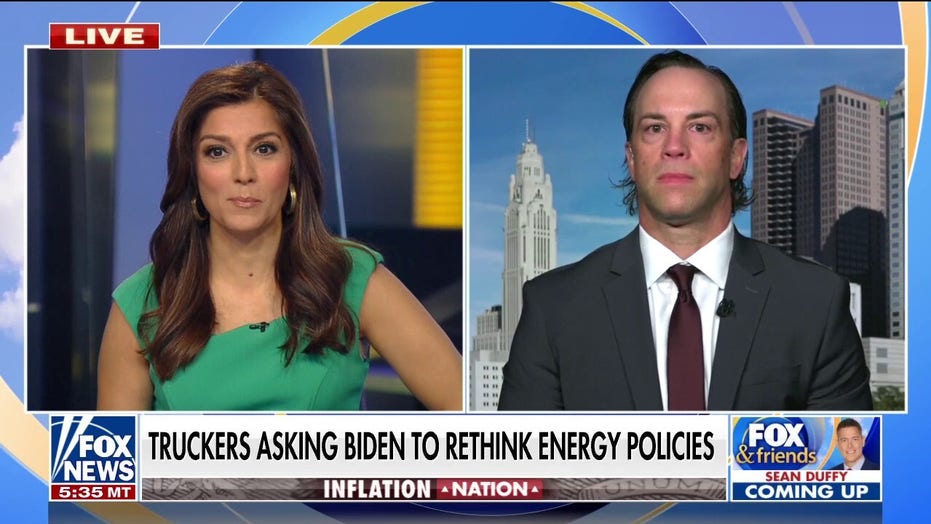 President and CEO of Ohio Trucking Association, Tom Balzer, joined 'Fox & Friends' to discuss the impact of energy prices on the transportation industry and consumers alike.

The truckers who have been caravanning around Washington, D.C., for weeks, protesting everything from vaccine mandates to Jan. 6, finally brought Congress to a standstill.

And they probably never even knew it.

Trucks park side-by-side taking part in a nationwide convoy from California to Washington D.C. Thousands of truckers are convoying from various parts of the country to protest COVID-19 mandates and other issues.  (Great American Patriot Project )

Rep. Don Beyer, D-Va., resides in northern Virginia. It’s customary that congressional leaders tap a local member from suburban Virginia or Maryland to preside over brief, "pro forma" sessions during which the House gavels in for a few moments and then gavels out — just to meet the constitutional requirement of meeting every three days. Monday's House session was scheduled to begin at 1 p.m. ET and would only take a few moments.

But rolling street closures were implemented by the Washington, D.C., police to thwart the truckers delayed Beyer from reaching the Capitol for the session.

Beyer rolled in at 1:22 p.m. ET for the abbreviated meeting.

Beyer was driving in from a meeting with students at Wakefield High School in northern Virginia. But the police had shut off various exits to reach downtown from the 14th Street Bridge.

NEW YORK MAN BICYCLING ACROSS US REVEALS HIS FAVORITE STATE SO FAR: ‘FEEL AT HOME’

Beyer says he got out of his car and approached the officer. He showed his congressional identification and told the officer he needed to make it to the Capitol. After all, he was the only member required to be there and would preside over the session.

The officer allowed Beyer to proceed to the Capitol, uninhibited so the House could conduct its brief session in accordance with the Constitution.

Truckers in Canada shut down Ottawa for days. But local police in Washington have made a point of deterring trucks from getting anywhere near Capitol Hill.

And, even though the truckers never actually came to the Capitol, they finally made an impact on American government: delaying a House session by 22 minutes.