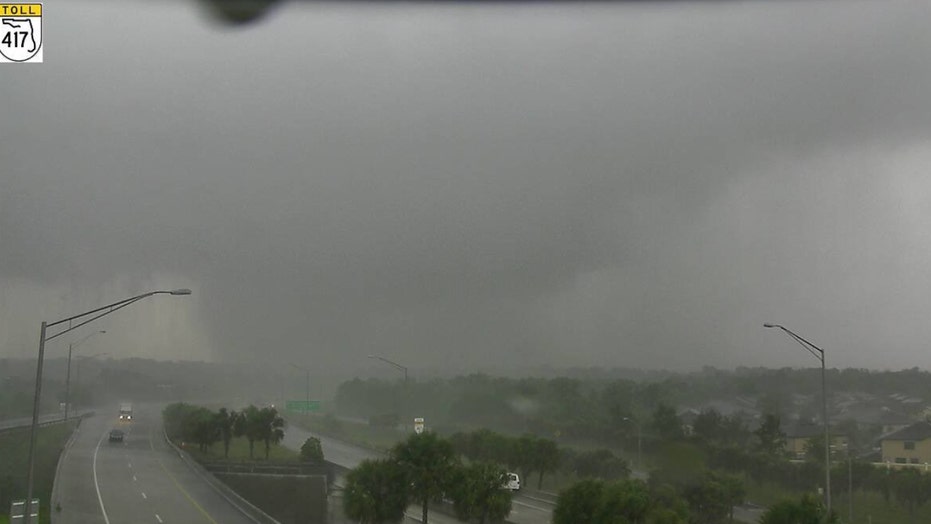 A powerful line of thunderstorms linked to a deadly storm system spawned at least one tornado in Central Florida on Monday as the severe weather caused some damage in the area.

The National Weather Service (NWS) office in Melbourne said a tornado warning was issued for Seminole County north of Orlando before just before noon.

"We have received reports of a tornado down on the ground just south of Sanford, near Lake Jessup," the NWS tweeted. "Remain inside and in the lowest room of your building!"

A traffic camera from the Lake Jessup area shows what appeared to be the tornado swirling in the distance.

Another video uploaded to Twitter shows the tornado from the Seminole County Sports Complex in Sanford.

Additional video out of Florida showed the possible supercell – a thunderstorm that can cause tornadoes – swirling above a housing complex in the Orlando area.

The Orlando Sanford International Airport said on Twitter that it was "up close" to the storm that moved a few miles from the airport.

Forecasters said by 12:50 p.m. the storms that produced the apparent tornadoes moved out over the waters of the Atlantic, where the threat for boaters continued as the storms moved east.

While it was not yet clear if the tornado created any damage in Seminole County, Duke Energy reported power lines down in several areas across Central Florida, including in Lake, DeLand, and Eustis counties.

Florida Power & Light was also reporting power lines down in Ocala, according to FOX35.

The city of DeLand also shared images of downed trees and power lines from the storms.

The storm system behind the violent weather in Florida was blamed for at least two deaths across the South from storms that rolled through a week after a deadly tornado outbreak in the region.

"This isn't the outbreak that we saw on Easter Sunday, where we had hundreds of reports of tornadoes, but we still have the risk as we go through the day today up toward the Southeast and then in towards the mid-Atlantic," Fox News Senior Meteorologist Janice Dean said on "Fox & Friends First."

The Storm Prediction Center (SPC) said that damaging wind gusts were the main concern across Florida, though isolated large hail and a tornado could not be ruled out.