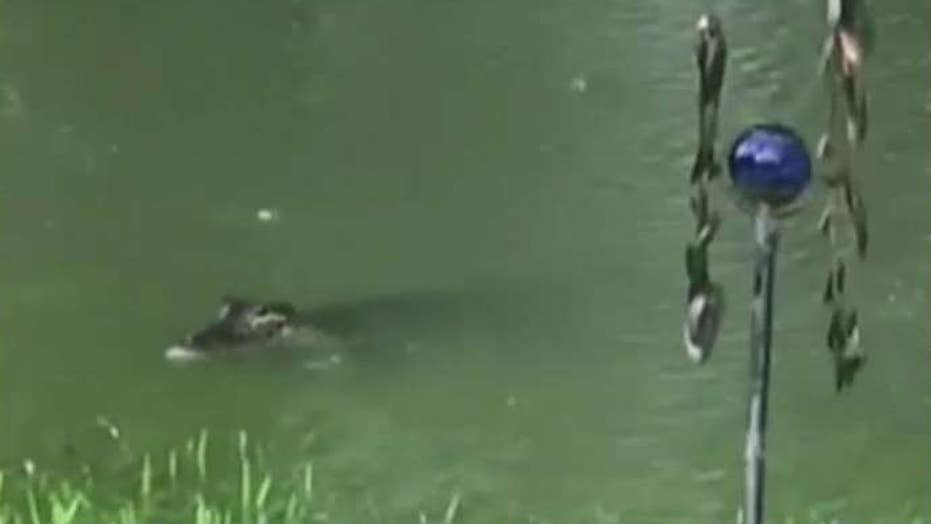 Texas resident films pair of gators in her flooded backyard

A Texas woman facing flooding from Harvey posted video of a startling sight: two alligators swimming through her backyard.

Arlene Kelsch uploaded the clip to Facebook Saturday showing the water level nearly covering her fence. She pointed out the first alligator swimming behind her home, then showed a section of the fence where the water was high enough for the gator to enter her yard.

Kelsch said she spotted the first gator and went outside to get a closer look when she noticed a second, even closer than the first.

“And now it looks like it’s not only him, but now him,” she said, showing the second gator just steps away from her. “So, not too far from just climbing on into the backyard and getting right here to the patio.”

Kelsch said that while she was surprised to see the gators so close, it was also exhilarating.

"Holy crap was my reaction," she told the Houston Chronicle. "I felt relatively safe seeing them, it's kind of cool. As long as I don't open my door, I'm fine, but it's still a little creepy."

She said gators weren’t the only visitors the storm was stirring up.

"We have seen some snakes,” Kelsch said. “That's really what I am keeping an eye out for inside my house.”

Experts advised anyone who encounters a gator to stay at least 30 feet away, and not to approach or try to feed it.