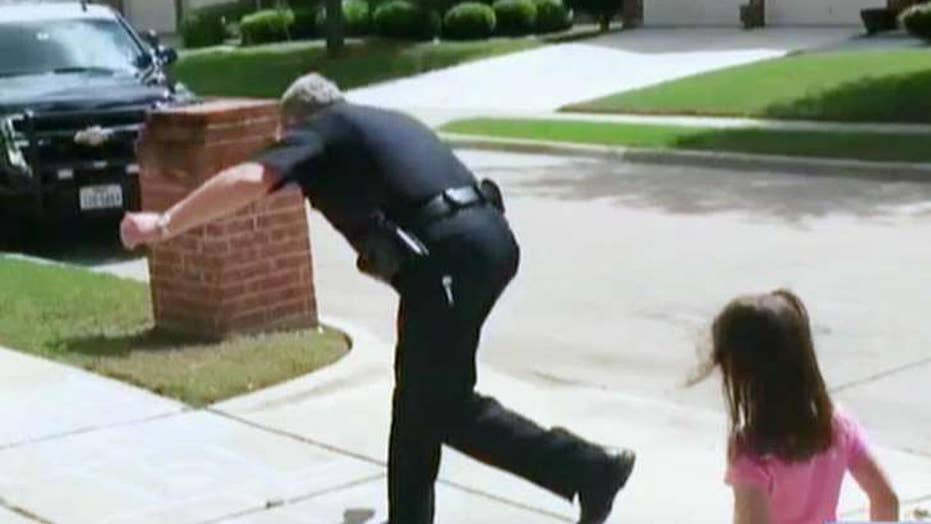 Detective Gensler shares the story behind the viral video

The Texas police officer who "skipped" out on his lunch break to play hopscotch with a little girl shared his account of the heartwarming story Monday on "FOX & Friends," days after the video went viral.

Detective Lyle Gensler of the Grand Prairie Police Department in Texas said he was driving home last week when he spotted 4-year-old Claire Jones playing in her driveway and waved at her.

When she waved back, he got out of his squad car and decided to join in.

TEXAS POLICE OFFICER PLAYS HOPSCOTCH WITH GIRL WHILE ON BREAK

"Well, it was almost an obligation," he said. "I felt that I had to pull over and teach her how to play."

Claire's mother, Dawn Clay, said that she loves to play the game in the family home and out on the driveway.

"I think people don't realize that police officers are mothers, fathers, sons, and what they do," she said.

On his Twitter biography, Gensler mentions that he is a former Marine, and says he tries to show "the human side of [his] profession."

"This isn't just me, this is law enforcement from West Coast to East Coast in my eyes," he said Monday on "FOX & Friends." "We do this a lot, it’s just by chance that this specific time someone had a camera rolling, and it worked out to benefit us and show what cops are in the nation today."