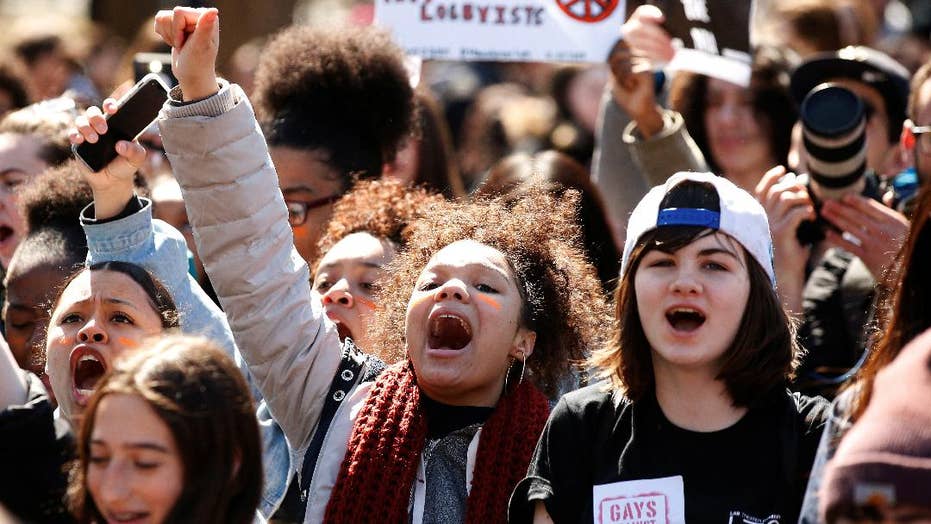 19 years after Columbine’s high school shooting and just a few months since Parkland, Florida’s tragedy, thousands of students nationwide walked out of school to demand action on gun reform. Take a look at the demonstrations from around the country.

A Texas middle school student was struck and killed by a vehicle Friday after leaving school during the nationwide walkout in support of gun control.

Jonathan Benko, 11, was identified by hospital officials as the Parkland Middle School student who died after he was hit along the northbound lanes of Loop 375 in El Paso, according to KFOX14.

"It is with great sadness and heavy hearts that we inform you of the death of a Parkland Middle School student who left campus this morning and was struck by a vehicle on Loop 375," a voicemail from Ysleta Independent School District officials to parents said.

Ysleta School District Superintendent Xavier De La Torre said Benko didn’t participate in the walkout, but was with an “isolated” group of students who left school as others protested, according to the El Paso Times. The students were being questioned as to why they left school.

Students told the El Paso Times those participating in the protest were set to meet at the school’s football field. But several students decided to hop over a fence and head for the highway.

"He was a free spirit. He was fun to be around, always lighting up the room," Angela Rodriguez, 14, told the El Paso Times. "He played the violin. He was very good. He was one of the best ones in the class."

University Medical Center, where the boy’s mother and uncle work, set up a memorial fund for him.

"All of us at UMC are heartbroken by the loss of a child belonging to one of our associates, especially a child as young as Jonathan,” hospital president and CEO Jacob Cintron said in a statement. “As a father, I can only imagine how hard this must be for Ashley and her family. She is also one of our family at UMC. Our support, thoughts and prayers are with her and her family throughout this difficult time.”