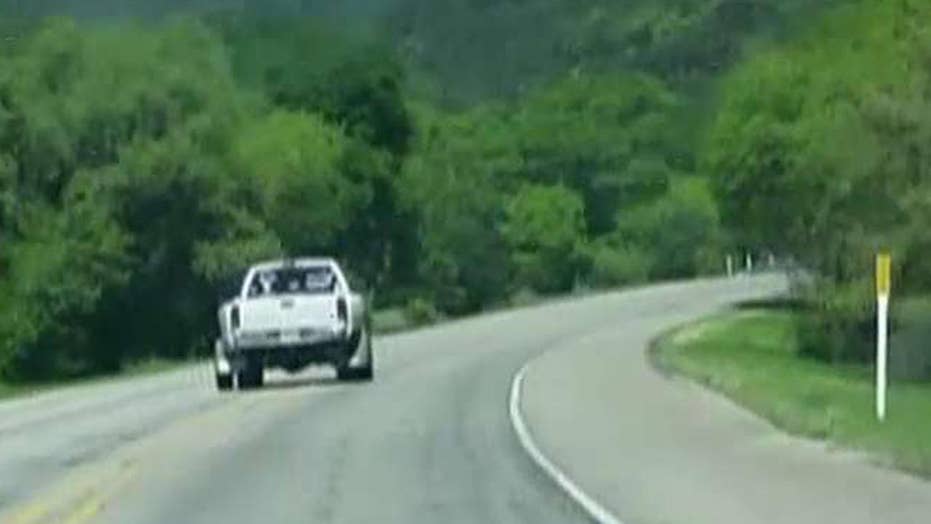 New video of driver swerving before crash in Texas

The driver in the pickup truck involved in a head-on collision with a church bus in Texas that killed 13 passengers swerved more than 50 times before the crash, according to a preliminary report released Thursday from the National Transportation Safety Board.

The report does not state a probable cause for the crash on U.S. 83 near Garner State Park on March 29, about 75 miles west of San Antonio. The report however lists what investigators are focusing on as they reconstruct the events that led to the deadly collision.

Included in the report is a review of a 14-minute long video by witness Jody Kuchler, which shows the pickup driven by Jack Dillon Young crossing the double yellow center line 19 times, the solid white shoulder lines 37 times, and the grass shoulder at least five times.

At one point in the video, the truck is seen traveling completely onto the wrong side of the road prior to the crash, according to the report.

Young, 20, and one passenger of the bus owned by the First Baptist Church of New Braunfels were the sole survivors of the crash, which happened as the senior adult members of the church were returning home from a church retreat.

Investigators with the NTSB estimate that the pickup was traveling at from 67 to 71 mph in a 70-mph speed zone, based on an analysis of the video.

Young told witnesses and the police after the crash he had been texting, and said during an NTSB interview he was "checking his phone for a text when the accident occurred."

"The driver also told NTSB investigators he had been taking prescription medications prior to the crash," the report said. "Several of those medications, as well as marijuana, were found in the pickup truck at the scene of the crash. Toxicology test results are pending."

The bus driver and front row passenger were wearing shoulder belts, while the passengers behind them were all wearing lap belts. Young was using no seatbelt.

No mechanical defects have been found in either vehicle, and no crash-related data have been retrieved from any vehicle devices capable of recording and transmitting such data, the report states.

Young has not yet been charged for the crash, but Uvalde County District Attorney Daniel Kindred told Fox San Antonio his office hopes to have a case prepared to submit to a grand jury in June.

Kindred said his office is awaiting a final report from the Department of Public Safety, along with subpoenaed records before it can move forward with analyzing the report's findings and establishing charges.