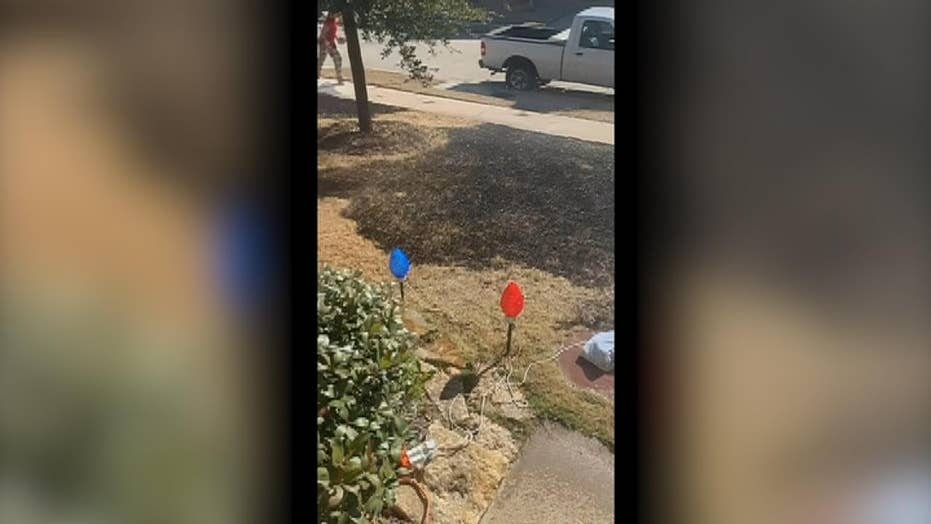 A boy's magnifying glass present led to a burnt lawn in McKinney, Texas.

Christmas went up in flames for a family in Texas, after a 12-year-old boy decided to use a magnifying glass for something other than reading.

Interior designer Nissa-Lynn Parson shared on Facebook how her family's Christmas Day was "memorable to say the least" after her 12-year-old son used the magnifying glass he received as a present to try to light things on fire.

"Cayden asked for a magnifying glass for Christmas,” Parson said in a video posted to Facebook. “We thought, ‘Oh, he wants to magnify something.’ No, he wanted to see if he can make fire with it, and they did."

"The other son in the background, 'Yay, now we can light stuff on fire.' And we're like, oh dear,’” Justin Parson told the television station.

On a sunny Christmas Day, the 12-year-old and his two brothers went out to the driveway and burned a couple of holes in some newspaper. But after one of them dropped the now-burning paper, the blaze ended up spreading to the front yard of their home in the Dallas suburb of McKinney.

"Everything was under control until the boys came running into the house telling us that a corner of the lawn was on fire and the Christmas lights were melting!" Parson wrote. "Justin and I rushed outside to see the entire front lawn turning black!"

The fire quickly spread, generating a cloud of smoke within minutes that one of the couple's sons said was "as high as the tree."

Family members rushed to get buckets of water and blankets to smother the flames while also turning the sprinklers on to prevent the flames from spreading to their neighbor's home.

"What a sight to see - a bunch of people running around crazy trying to put a front lawn fire out while wearing matching Christmas jammies!" Parson wrote on Facebook.

The blaze ended up scorching the front yard of the family home, in addition to destroying some of the Christmas lights out front. The family, however, is grateful that no major damage or injuries resulted from the blaze.

A 12-year-old boy in Texas ended up setting his front yard ablaze on Christmas day after using a magnifying glass to light a newspaper on fire. (Nissa-Lynn Parson via Storyful)

Nissa-Lynn Parson said after the incident on Christmas Day, the magnifying glass is now going to be strictly used in non-flammable situations.

"No burning, like, it is in house. I want it like only for reading or words," she told FOX4, adding that her son now has some hard work of his own ahead

"They will definitely have yard work to do once spring comes," she said Saturday.

It appears that Cayden also learned a valuable lesson after the incident.

"I shouldn't start any more fires,” he told FOX4.