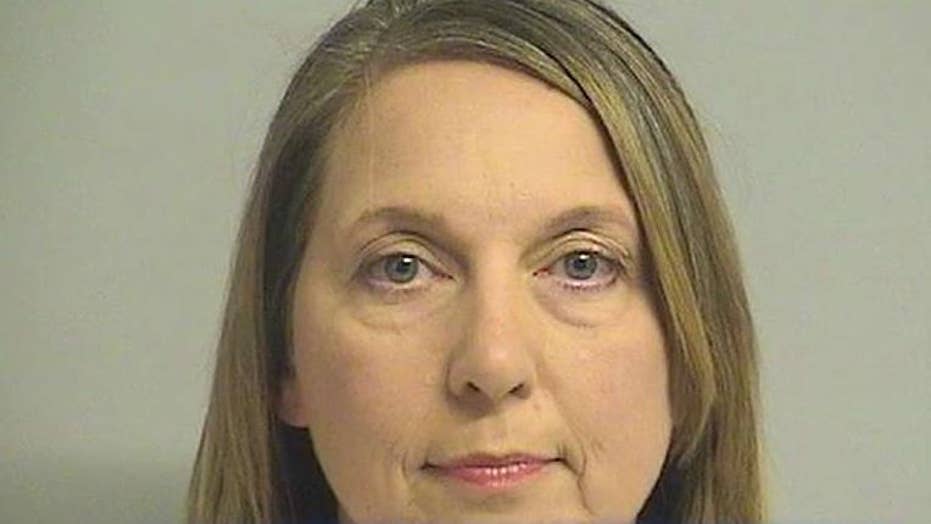 Officer Betty Shelby has turned herself in

The trial for an Oklahoma police officer accused of shooting and killing an unarmed man last year is set to begin Monday.

Officer Betty Shelby, 43, faces a first-degree manslaughter charge for shooting Terence Crutcher, 40, last September in Tulsa. She pleaded not guilty to the charge, claiming she fired her gun as self-defense. Her attorneys said Shelby feared for her life and believed Crutcher was reaching for a gun in his vehicle at the moment.

She faces four years to life in prison if convicted.

EXPERTS: MAY BE HARD CONVICTING TULSA COP OF MANSLAUGHTER

Tulsa County District Attorney charged Shelby six days after the incident, claiming she became "emotionally involved to the point that she overreacted," the affidavit said. She was placed on unpaid leave.

Jurors will be looking into two videos -- one from a dashboard camera and another from a police helicopter -- as key evidences during the trial. The dash camera showed Crutcher with his arms up and walking toward his vehicle and away from Shelby. The officer spotted Crutcher's SUV while she was responding to a domestic violence call that day.

Shelby's attorneys said the officer suspected Crutcher was on PCP, a hallucinogenic that can cause erratic, unpredictable and combative behavior. A vial of the substance, also known as Angel Dust, was later found in his SUV.

Shelby said she ordered Crutcher to stop walking and get on the floor about two minutes before the video started recording, according to the Associated Press.

"Her options went to zero when he turned and put his hand in the car," defense attorney Shannon McMurray said.

Shelby reiterated her actions in an interview with CBS' "60 Minutes," stating that Crutcher ignored her repeated calls to stop.

"I say with a louder, more intense voice, 'Stop. Stop! Stop!' And he didn't. And that's when I took aim," she told the show.

It's unclear when Shelby shot Crutcher in the video, though her partner, Tyler Turnbough, used his stun gun on the man at the same time.

Turnbough later defended Shelby and said she followed protocol in Crutcher's case especially when the suspect may be under the influence of drugs.

"Officer Shelby's reaction was appropriate and necessary," he told the National Center for Police Defense, a nonprofit that provides medical and legal aid to officers in cases like these.

"There is no way of knowing what he was reaching for and to take a chance could be deadly," he added.

A toxicology report revealed Crutcher did have PCP in his system, but his family said that doesn't ignore the fact that a gun wasn't found in the SUV.

"His hands were up, there was daylight, everyone can clearly see that he had no weapon in his hand whatsoever," Crutcher's twin sister, Tiffany Crutcher, told The Associated Press in September.

Shelby's attorney also claimed Crutcher posed as a threat the day before the September incident when he allegedly pointed a gun at someone near the area. There was no official report o the incident, though police did respond to a call there.