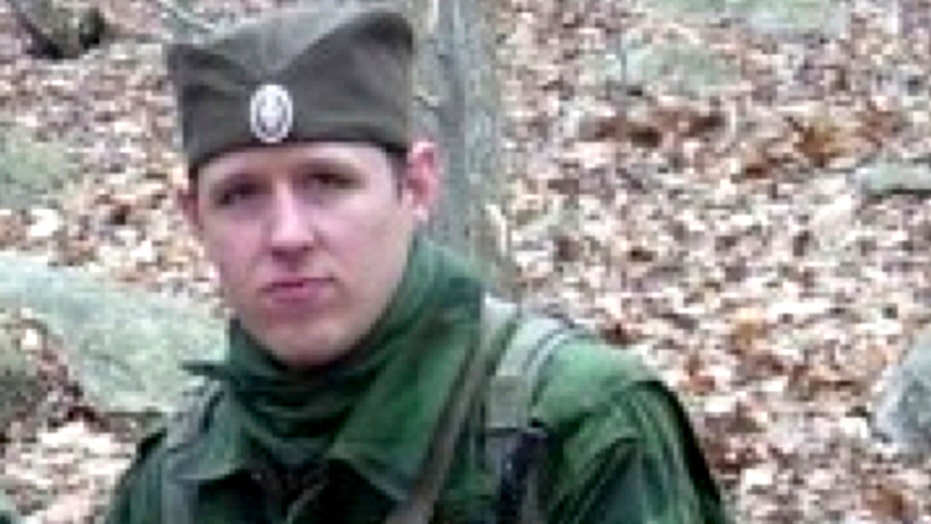 Pennsylvania community on edge as cops search for alleged killer

The survivalist suspect in the ambush killing of a Pennsylvania state trooper is a member of a military simulation unit based in the eastern part of the state and, in his frame of mind, appears to have assumed that role in real life, authorities said at a Wednesday press conference.

Lt. Col. George Bivens said the suspect, Eric Matthew Frein, belongs to a unit that assumes the role of Eastern European soldiers. He did not name the specific group, but said other members are being interviewed by police.

Frein has also changed his hairstyle. He shaved his head on the sides and has long hair on top that Bivens described as "wider than a Mohawk."

Investigators believe the hair change was part of his preparations for the "cowardly" attack, Bivens said.

More than 150 law enforcement officers fanned out across the dense northeastern Pennsylvania woods Wednesday as they tracked Frein, who is believed to be armed with two high-powered rifles and a grudge against police he's had since 2006. Frein was identified by police as the gunman who killed one trooper and injured another in a late-night ambush outside a state police barracks.

Schools in the Pocono Mountain and nearby Wallenpaupack district were closed Wednesday due to fears of the suspected gunman, The Pocono Record reported. Bivens said the decisions to close the schools were made by the individual school boards.

"While we can never completely rule out an act of violence, I am convinced Frein is engaged in a personal battle with law enforcement, particularly Pennsylvania State Police," Bivens said.

His father, Michael, a retired major in the U.S. Army with 28 years of service, told police that his son is an excellent marksman who “doesn’t miss,” according to a police affidavit. The suspect lived about 20 miles from the ambush site and lived with his parents until a few months ago, Lehigh Valley Live reported. A sniper training magazine was reportedly found inside the parents' home.

The gunman killed Cpl. Bryon Dickson, 38, and critically wounded Trooper Alex Douglass outside the barracks during a late-night shift change, then slipped away. The Times-Leader reported that surveillance cameras recorded the gunshots and the rescue to save the officers.

Authorities were led to Frein after a resident who was walking his dog in a wooded area 2 miles from the barracks Monday spotted a 2001 Jeep lightly submerged in a pond and called 911. Police said they found shell casings inside the vehicle that matched those found at the shooting scene.

"This was not unexpected," Bivens said. "As we've interviewed a number of people, that's been the common theme. This was not a surprise."

Three state police patrol cars were parked at Frein's parents' home, a well-kept two-story residence in a private community. Several other cars were in the driveway Tuesday afternoon.