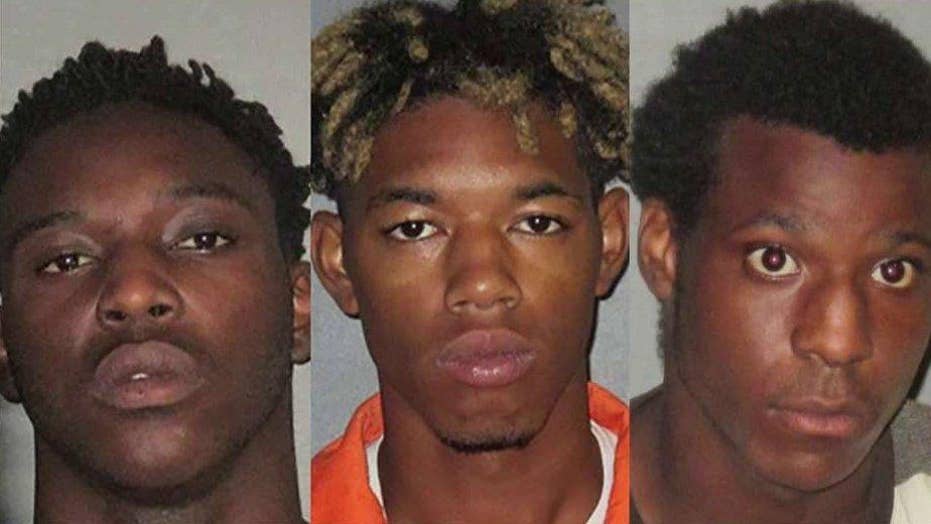 Authorities in Louisiana said Tuesday that a burglary at a Baton Rouge pawn shop was part of a larger conspiracy to target law enforcement officers amid protests over the fatal shooting of an African-American man by police.

Investigators believe four men broke into the pawn shop early Saturday and stole eight handguns. Baton Rouge Police Chief Carl Dabadie said that one of the suspected robbers was captured at the scene and told officers the guns were stolen "to get bullets to harm police officers." Dabadie said the suspect, later identified as 17-year-old Antonio Thomas, didn't indicate when or where a possible plot would be carried out.

"We have been questioned repeatedly over the last several days about our show of force and why we have the tactics that we have. Well, this is the reason, because we had credible threats against the lives of law enforcement in this city," Dabadie added.

The police department has come under criticism for the tactics it's employed to deal with protesters, using riot police and military-style vehicles on the streets of the capital city. Over a three day period, police arrested about 200 protesters.

Another suspect, Malik Bridgewater, 20, was apprehended Sunday and a third suspect -- a 13-old boy -- was apprehended on a street. They called on the fourth suspect to turn himself in.

Another man was arrested for allegedly purchasing two of the stolen guns, but he hasn't been linked to the alleged plot, a police spokesman said.

All of the suspects are from Baton Rouge and all are black. The suspects face charges including burglary, simple burglary, and theft of a firearm; they have not been arrested on any charges related to plotting to kill police.

"Look what happened in Dallas," Edmonson said, referencing the shooting of five Dallas police officers by a sniper last Thursday. "I think the threats speak for themselves. We can't take anything for granted."

A number of threats have been made against Louisiana law enforcement officers since Sterling's death. However, authorities said this was the first one that had been deemed substantive and credible.

Edmonson said authorities were investigating a case where an officer had reported being followed, but declined to provide more details.

"We've had a police officer with teeth knocked out of his face because of a rock. If you don't have on riot gear, you have no defense against that sort of thing," said the Democratic governor, who comes from a family of sheriffs.

"In light of what happened in Dallas, understanding that just one gunman can change the situation entirely, how do you in good conscience put police officers on the street without the ability to defend themselves?" he said.

The Justice Department has opened a federal civil rights investigation into Sterling's shooting.

The American Civil Liberties Union of Louisiana has criticized police as using "violent, militarized tactics on groups of people who have gathered peacefully." Amnesty International has questioned the high number of arrests.

Community leaders have tried to defuse tension and keep interactions between protesters and law enforcement calm.

State Rep. Ted James, a black lawyer who grew up in the area where Sterling was shot, and Cleve Dunn Jr., a prominent black businessman in Baton Rouge, met with local Republican leaders at a public luncheon to discuss the shooting. The two men have showed up at protests and urged calm.

James said black community leaders want Louisiana Attorney General Jeff Landry to appoint a special prosecutor to handle any state investigation into Sterling's shooting death. He said the attorney general's office doesn't have the level of expertise to do the investigation and the appointment of an outside prosecutor would depoliticize the work.