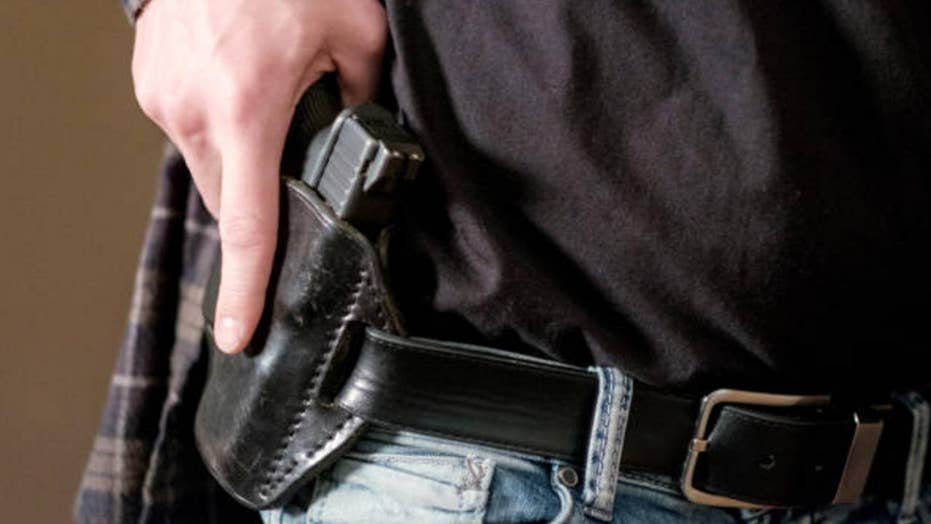 In Tennessee, concealed guns may now be carried in a broader range of public buildings and bus stations. And in Iowa, permit holders are now able to carry concealed guns in the Capitol.

Jennifer Baker, a spokeswoman for the National Rifle Association Institute of Legislative Action, described 2017 as another "successful year for gun rights."

The new laws continue a pattern of the expansion of gun rights in GOP-controlled states.

The firearms policies are among scores of laws that took effect Saturday, along with the start of the new fiscal year in many states. Some of those laws continue a recent trend of states taking the initiative to fix aging roads and address the drug overdose epidemic.

“A couple of my friends decided that they were going to go somewhere else, because it kind of freaked them out,” Elena Mendoza, who will start school at Johnson County Community College in the fall, was quoted as telling the Kansas City Star. “Most of us were like, if someone has access to a weapon, they can use it either way.”

If someone has access to a weapon, they can use it either way.

Chris Gray, a Johnson County Community College spokesman, said that some students are concerned about the impact of the law.

“There is that fear of the unknown. What is going to happen?” Gray said.

“Does it make me feel safer? I’d say yes,” Serum said to the Star.

Cale Ostby, 27, a Wichita State University student, said that many people in Kansas have concealed guns, and that the concept is nothing new.

“It’s insane that I can carry everywhere else except school,” Ostby said.

A voter-approved gun-control initiative prohibiting people from possessing ammunition magazines capable of holding more than 10 bullets was to go into effect Saturday in California. But it was blocked by a federal judge, who said it would have made criminals out of thousands of otherwise law-abiding citizens who own the magazines. A similar law passed by the Democratic-dominated Legislature also is subject to the preliminary injunction.

For decades, the National Rifle Association pushed for state laws allowing people to carry concealed guns with permits. Having succeeded nationwide, gun-rights advocates now are gradually expanding where those weapons can be taken. Yet even some of the new laws contain exceptions.

Does it make me feel safer? I'd say yes.

Georgia's law allows people with concealed handgun permits to take their weapons into classrooms but not dormitories, and college sports fans can pack weapons while tailgating but not inside stadiums.

A Tennessee law allowing guns in many local public buildings, bus stations and parks can be voided if authorities instead opt to install metal detectors staffed by security guards.

Concealed guns are now allowed at college campuses in Kansas as a result of a 2013 law that applies to public buildings lacking heightened security such as metal detectors and guards. A four-year exemption for universities expired Saturday. But in a setback for the NRA, a law that Republican Gov. Sam Brownback is allowing to take effect without his signature will make permanent a similar exemption for public hospitals and mental health centers.

In Iowa, the new law allowing permit holders to carry concealed guns in the Capital prompted the state Supreme Court to ban weapons in all courthouses statewide.

Gun rights advocates lauded the laws expanding the circumstances in which people may carry an arm.

Advocates for greater gun regulations also are pleased with the results. On Thursday, Democratic-led Hawaii became the third state to enact a law requiring notification to law enforcement when people prohibited from owning guns try to obtain them anyway.

"This was an excellent year for killing bad gun-lobby bills," said Shannon Watts, the founder of Moms Demand Action for Gun Sense in America. "The bills that the gun lobby did get through, in many cases, we helped to water those down."

Here's a look at some other laws that took effect Saturday:

As with guns, some Republican and Democratic states continue to move in opposite directions on abortion-related policies.

A Tennessee law will require doctors to determine the viability of fetuses of at least 20 weeks of gestation, making it a felony to abort a viable fetus unless the pregnancy puts a woman at risk of death or serious injury. In South Dakota, new felony charges will double the potential fines and prison time for physicians who abort a fetus capable of feeling pain, except in cases of medical emergencies.

Other new laws deal with notifications required before abortions.

A Wyoming law will require abortion providers to give women the opportunity to view an ultrasound and listen to the fetal heartbeat. It also will prohibit the use of aborted fetal tissue for research.

A Kansas law will require abortion providers to give women more information about their doctors, including their credentials, malpractice insurance, disciplinary records and hospital privileges. The law also eliminates fine print, requiring the information to be presented in 12-point Times New Roman type on white paper.

A West Virginia law will end a doctor's ability to waive parental notification, allowing only a judge to do so. But a federal judge has blocked an Indiana law that would require courts to consider whether to notify parents about a minor's request for an abortion.

Starting Saturday, the gas tax will rise by 10 cents a gallon in Indiana, 4.5 cents in Montana, 4 cents in Tennessee, 3.5 cents in West Virginia and 2 cents in South Carolina. In some cases, it's the initial step in a multi-year tax increase.

In South Carolina and Tennessee, the gas tax hike is the first in about three decades.

The vehicle sales tax cap also is rising in South Carolina, and vehicle or driver's license fees will rise in Indiana, West Virginia and Wyoming.

In Oklahoma, a 1.25 percent vehicle sales tax will kick in Saturday. But it won't result in an influx for road projects, because millions of dollars of existing road funds are being diverted to help fill a budget shortfall.

The latest round of tax hikes means nearly three-fourths of states have taken some sort of action to increase transportation funding over the past five years.

Some states also are ramping up other vehicle-related laws.

Mississippi will require seat belt use by all vehicle occupants, instead of only front-seat passengers and children. Iowa will join most other states by making texting while driving a primary offense, meaning police can stop motorists for the violation instead of having to spot some other offense in order to pull them over.

Virginia will require driver's education courses to include instruction on how to respond when pulled over by police.

Most Arizona employers will be required to offer paid sick leave to their workers because of a 2016 ballot initiative that takes effect Saturday. Arizona will be the seventh state with such a requirement, all enacted since 2011.

New Mexico and Kentucky are enacting laws attempting to safeguard student athletes. New Mexico will require student training on the danger of brain injuries, while Kentucky will prohibit high school coaches from putting athletes back in the game after potential concussions if no doctors are available to assess them.

Other new laws will expand patients' rights in an attempt to avoid unexpected medical costs. A Missouri law will require health care providers to give patients costs estimates upon request, and a California law will require patients' written consent before receiving services from providers outside their insurance network.

Kentucky will ban doctors from prescribing a more than three-day supply of prescription painkillers, although the law has various exceptions.

New laws in Virginia will legalize syringe exchange programs and require physicians to check a prescription drug monitoring database before prescribing opioids for more than seven days. Wyoming will join most other states in providing immunity to those who administer overdose medications