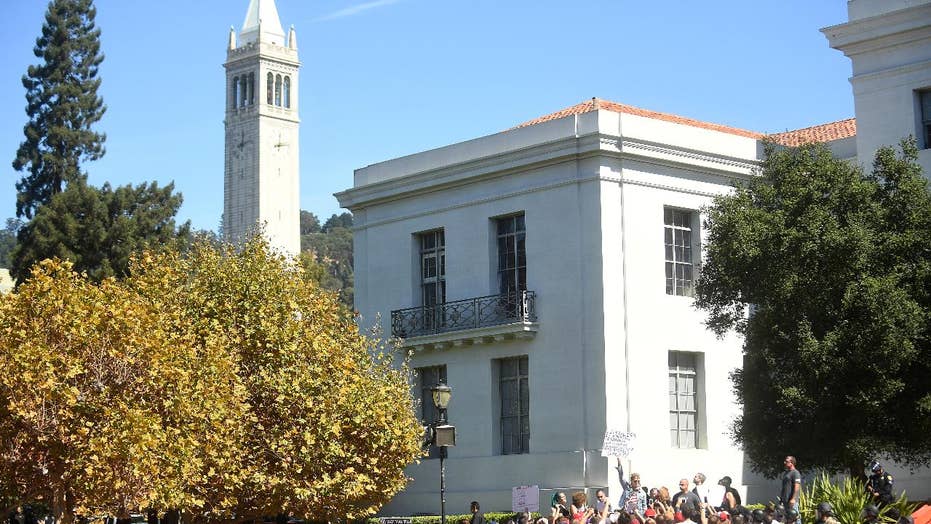 A look at the 10 worst colleges for free speech

Guess which colleges made the list for the worst offenders against free speech, according to FIRE (Foundation for Individual Rights in Education)? #Tucker

The Star-Spangled Banner is no longer banned at Stanford University.

The California college last week reversed its controversial decision that would have banned the American flag on College Republicans’ apparel.

“We are glad that Stanford has made the right decision. The Stanford College Republicans are honored to have seen the support of patriots across the country for our organization," College Republicans' president John David Rice-Cameron told Fox News. "We are now more emboldened than ever to continue our efforts to promote liberty on Stanford’s campus.”

The Stanford College Republicans were initially denied the ability to use the American flag in their apparel designs. (The College Fix)

After initially rejecting the College Republicans’ t-shirt design because the logo contained a portion of the American flag, a school official said Stanford decided to approve the apparel and is reconsidering its trademark policy.

“Stanford College Republicans is welcome to use the images of the U.S. flag reflected in the current design of its logos,” university spokeswoman, Lisa Lapin, told Fox News. “We now recognize that the specific policy was framed in an overly restrictive manner.”

The Stanford College Republicans can now use the logo for their new t-shirts after the university reversed its decision. (The College Fix)

The university pointed to its trademark guide as to the reason for the rejection. And though the guide doesn’t include any references to flags, a university official said the policy was part of a broader policy intended to avoid associating the Stanford name/logo with specific political perspectives.

“Stanford does not approve the use of the American (or other flag) on product also featuring our trademarks (including the Stanford name),” Stanford University’s trademark licensing associate, Kara Hegwood, wrote in an email to the College Republicans president last month.

Hegwood initially wrote the university “can approve red/white/blue themed product but cannot approve this design which features altered version of the flag in the background of the design, and within the initials for the organization name.”