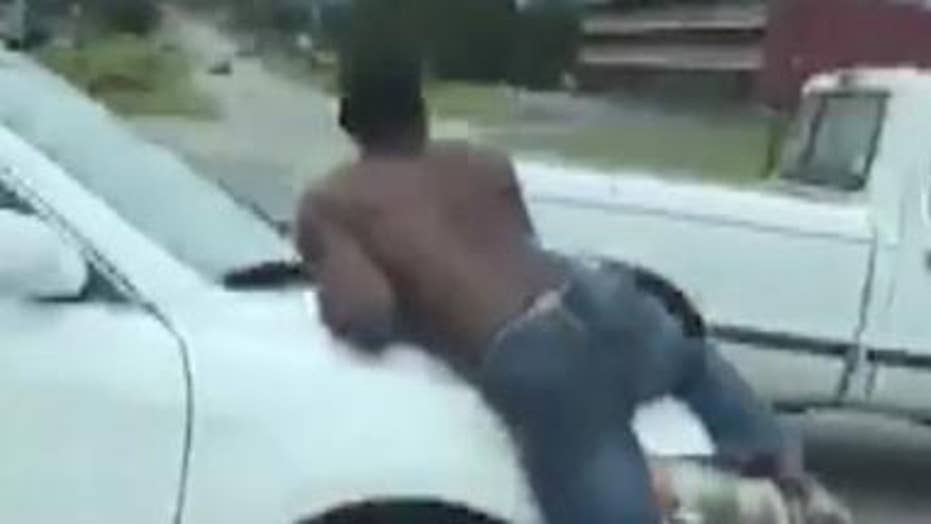 Georgia man clings to hood of car for several miles

Shirtless, shoeless Georgia man jumped on and clung to the hood of a woman's moving car for several miles.

A recent video depicting a shirtless, shoeless man hanging onto the hood of a moving car has sparked an investigation by Georgia police.

Viviana Deyette, the car’s 17-year-old driver, said the man came out of nowhere and was frantically yelling about being in severe danger when he hopped onto the hood, FOX5 Atlanta reported.

“He was yelling that they are shooting at them and I didn’t know where he had come from and I thought someone was actually shooting at him,” Deyette told the station. “He kept yelling at me to drive.”

Police say Deyette drove a considerable distance with the man hanging onto the hood and was determined not to stop until she was in a safe environment. The man’s feet were nearly touching the road as the vehicle was traveling along a busy highway.

“She was able to keep a clear mind to get to safety, get to where she knew there was other people so she did the right thing,” said Sgt. Kevin Holbrook with Gainesville Police Department.

Police said numerous people called 911 earlier to report the man obstructing traffic with his behavior near a Motel 6 location on Highway 129, where investigators believe he was staying, according to FOX5 Atlanta.

The 37-year-old, whose identity has not been released because he was taken to a local hospital for a mental evaluation, was found with drug paraphernalia on him after being taken into custody.

Police believe he may have been hallucinating at the time of the incident and Holbrook added “criminal charges may be possible in this case. There was damage done to this car as well as other cars from this individual.”

Deyette also told the station that she hopes the man ends up “somewhere where he would get the mental health and the help he needs.”