Sherri Papini, California mom behind kidnapping hoax, is confronted with evidence of the truth: SEE IT

Interview footage released by the Shasta County Sheriff's Office shows detectives interviewing California mom Sherri Papini about her kidnapping — and ultimately confronting her with the truth.

Sherri Papini, the California mother sentenced for faking her kidnapping in order to run off with a former love interest and then collecting victims’ assistance funds for years, begged her husband and police not to pursue charges against one of her fake abductors before they ultimately confronted her with the truth of her scheme: Her abductors did not exist.

Papini met with Shasta County Sheriff’s Office investigators on Aug. 13, 2020 — over three years after she claimed she was abducted by two Hispanic women while she was running in Redding, California. She was joined by her husband, Keith Papini, for the meeting with two investigators.

According to footage from the interview, investigators began by asking Sherri if she would like Keith to remain in the room as they discuss "this next stage of things." They then left the couple alone inside the room, at which point Sherri turned and began to cry and whisper to her husband.

CALIFORNIA MOM SHERRI PAPINI SENTENCED TO 18 MONTHS IN PRISON FOR FAKING ABDUCTION, RUNNING AWAY WITH EX-FLING

Keith then asked her to tell him why, to which she responded: "Because she saved my life."

Sherri later added that, "She saved my life, and she’s the reason why I get to hold my children every single day."

"No matter what happens, do you think this just sits here?," Keith later noted. "Whatever happened is over. And it doesn’t matter what you say. The girl is going to get in trouble."

CALIFORNIA MOM SHERRI PAPINI ENDURING WHAT 'FEELS LIKE A LIFE SENTENCE,' LAWYER SAYS AHEAD OF SENTENCING

In addition to her sentence, Sherri Papini also agreed to restitution payments of up to $300,000. (Rich Pedroncelli/AP)

He then told Sherri, "You're not making sense … to a point where I'm getting scared now."

The investigators re-entered minutes later. Keith can be seen remaining seated in a chair next to Sherri as she slowly repeated how she does not want to press charges against the woman or have her arrested.

"I don’t want her to get in trouble," Papini told investigators.

One of the detectives then responded: "She’s not going to get in trouble. So, the DNA came back to James Reyes."

In this Nov. 10, 2016, file photo, a "missing" sign for Redding, California, resident Sherri Papini is seen near the location where the mother of two is initially believed to have gone missing while jogging. (Andrew Seng/The Sacramento Bee via AP, File)

"The DNA that was on you belongs to James Reyes," the other investigator added, according to the video.

Reyes is Sherri's ex-boyfriend, who she said she knew closely in the early 2000s when she was living in Southern California.

Keith held his hands in his lap, with his foot on his knee, as detectives continued to reveal their findings. Sherri stared straight ahead at the detectives and, at times, looked at her husband.

CALIFORNIA MOTHER WHO ALLEGEDLY FAKED HER OWN KIDNAPPING STRIKES PLEA DEAL, WILL ADMIT IT WAS A HOAX

"We talked to him. We’ve been on a polygraph. We talked to everybody around him. We have the rental agreements. Phone rental, car rental agreements. We have everything that says that he said he told the truth," the detective told Sherri. "Everything, you’ve told us so many truths in this situation. The reason why you can describe the room is because you stayed in the room, in the dark, for hours, for days on end."

The Sacramento Bee reported that it acquired an audio clip of the exchange between dispatchers and officers in the moments after 34-year-old Sherri Papini flagged down a passing motorist near Interstate 5. (Fox News)

In the video, Sherri can be seen covering her face with her hands as investigators describe the evidence to her, and beginning to cry and wail, "No," as the details continue.

As she continued to deny it and cry, the other investigator can be heard adding: "We even collected blonde hairs from the room."

Sherri, holding her head in her hands, continued to say, "There’s no way," and then, "We were friends. There’s no way."

She told investigators that she last spoke to the man "when his brother died," after the alleged abduction.

She said she had not seen him since "forever ago, when I lived in Southern California."

"He told us what happened," one of the detectives can be heard telling Sherri, "and gave us details nobody else would know."

Sherri Papini arrives at the federal courthouse in Sacramento, California, for sentencing accompanied by her attorney, William Portanova, on Monday. (AP Photo/Rich Pedroncelli)

Papini, now 39, pleaded guilty in April to two of the 35 total counts — for engaging in mail fraud and making false statements to a federal office, prosecutors said. She was sentenced on Monday to 18 months in prison for her costly scheme.

The married mother of two from Redding, California, was first reported missing on Nov, 2, 2016, after she left home for a jog. Family members grew concerned after she never picked up her children from day care, and her husband discovered her cellphone and headphones along the road.

She re-emerged on Thanksgiving Day 2016, still wearing bindings and with injuries, including a battered nose, ligature marks, burns, rashes and a branding on her right shoulder.

Papini claimed to have been kidnapped and held at gunpoint by two Hispanic women, whom she described to investigators — and an FBI sketch artist — and told a tale of her time in captivity. However, during repeated interviews, she changed her story or was not able to provide key details, investigators alleged. 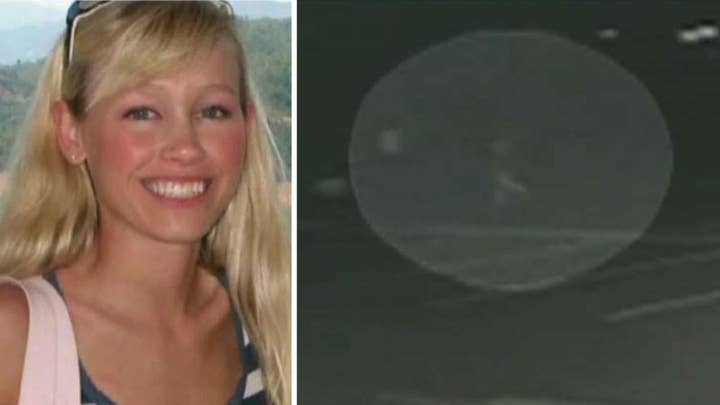 Prior to the plea deal, Papini was facing 34 counts of mail fraud and one count of making false statements.

Before the judge announced the sentence on Monday, Papini read a statement to the court in which she told the jurist she was "so sorry" to those she had impacted and was "choosing to humbly accept responsibility," according to the Sacramento Bee.

"You’ve seen so much dishonor laid before you here in this room," Papini said, according to the report. "People who are not willing to walk through the shame to say they are guilty. I am not one of them, your honor."

She later added: "What was done cannot be undone. It can never be erased. I am not choosing to stay frozen like I was in 2016. I am choosing to commit to healing the parts of myself that were so very broken."

Sherri Papini is shown leaving her Redding, California, home a few months after she claimed she was kidnapped. (Mega )

After news of her sentence, Keith Papini released a statement to People in which he said the recent events had been "shocking and devastating."

"My current focus is on moving on and doing everything I can to provide my two children with as normal, healthy and happy of a life as possible," he said, according to the report.

Prosecutors urged Shubb to sentence Sherri Papini to eight months in jail, which they described as a "low-end Guidelines sentence" that "fully and fairly accounts for the totality of Papini’s conduct and the relevant sentencing factors," the document states.

They slammed Papini for planning and executing "a sophisticated kidnapping hoax" and then continuing to lie for years after she returned.

"As a result, state and federal investigators devoted limited resources to Papini’s case for nearly four years before they independently learned the truth: that she was not kidnapped or tortured," prosecutors said.

The sentencing memorandum added: "During this time, Papini caused innocent individuals to become targets of a criminal investigation. She left the public in fear of her alleged Hispanic capturers who purportedly remained at large."

Prosecutors further slammed Papini for repeating her bogus story to law enforcement, even in August 2020 when agents confronted her with the evidence of what really happened. She also allegedly lied to the California Victim Compensation Board and the Social Security Administration to receive financial benefits.

In his own sentencing memorandum, Papini defense attorney William Portanova asked that the jurist order Papini to serve one month in jail and the remaining seven under house arrest, in line with the United States Probation Office’s recommendation.

Portanova described Papini as "outwardly sweet and loving, yet capable of intense deceit, whether for purposes of situational control or emotional self-protection."

The FBI poster of the suspects in the kidnapping of Sherri Papini. (FBI)

"Ms. Papini’s chameleonic personalities drove her to simultaneously crave family security and the freedom of youth," the filing states. "While these are not unique feelings, in her they were pathological. Her life was painful until she married and began a family of her own."

After running away from her husband and family, she returned and continued to spew lie after lie, "terrified that she had actually destroyed the one thing in her life that brought her true love and happiness, her family, desperately praying that the day of discovery would never come," Portanova wrote.

"Her unsettled masochism was in full public display when she returned from her fake kidnapping bearing the scars and wounds of her self-inflicted penance," he wrote. He later added: "There seems to be little or no chance for Sherri to go backwards now. The lies are out, the guilt admitted, the shame universally seen."

Portanova added: "It is hard to imagine a more brutal public revelation of a person’s broken inner self. At this point, the punishment is already intense and feels like a life sentence."

In addition to her sentence, Papini also agreed to restitution payments of up to $300,000. More specifically, she was ordered to pay nearly $149,000 to the Shasta County Sheriff’s Office; at least $127,568 to the Social Security Administration; $30,694 to the California Victims Compensation Board; and more than $2,500 to the FBI, according to court papers.