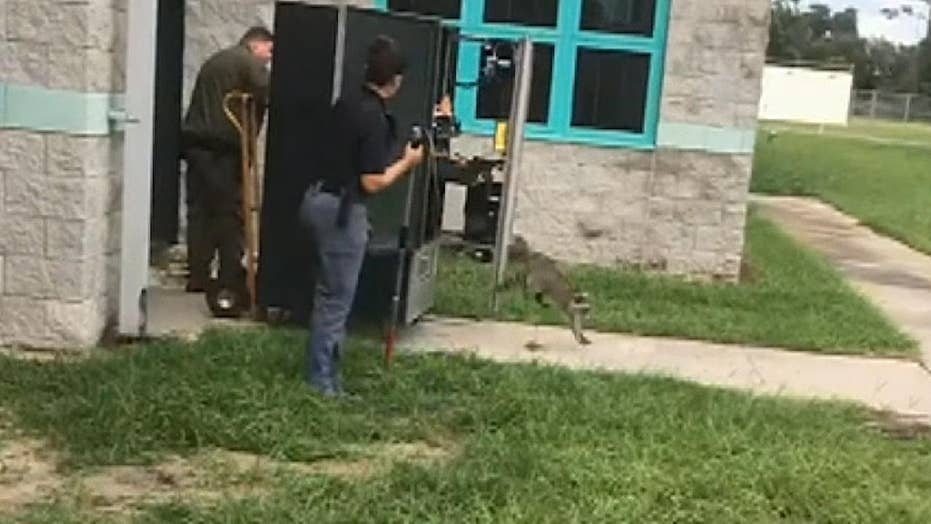 Raw video: Raccoon gets trapped inside vending machine in FL

The Volusia County Sheriff's Office had to open the machine up, allowing the critter to escape.

A raccoon became trapped in a high school vending machine in Florida on Wednesday and sheriff’s deputies came to the rescue.

In a wry touch, the Volusia County Sheriff's Office posted on Facebook Wednesday that "this gentleman was apprehended today while committing a burglary of a vending machine at Pine Ridge High School.”

The post included two pictures of a raccoon inside the vending machine.

Pine Ridge High School is in Deltona, 45 minutes from Orlando.

In a later post, which included video, the sheriff’s office shared “the moment our vending machine raccoon buddy got his freedom.”

A deputy, an animal control officer and a high school guardian joined forces in this mission of liberation.

“For anyone wondering about the outcome of this call, Deputy Danny Clifton called in Deltona Animal Control, and together they put this vending machine on a dolly and wheeled it out to an area where our friend could make his exit to freedom,” The Volusia County Sheriff's Office said.

“He did so with a little encouragement, and he's off to his next adventure.”