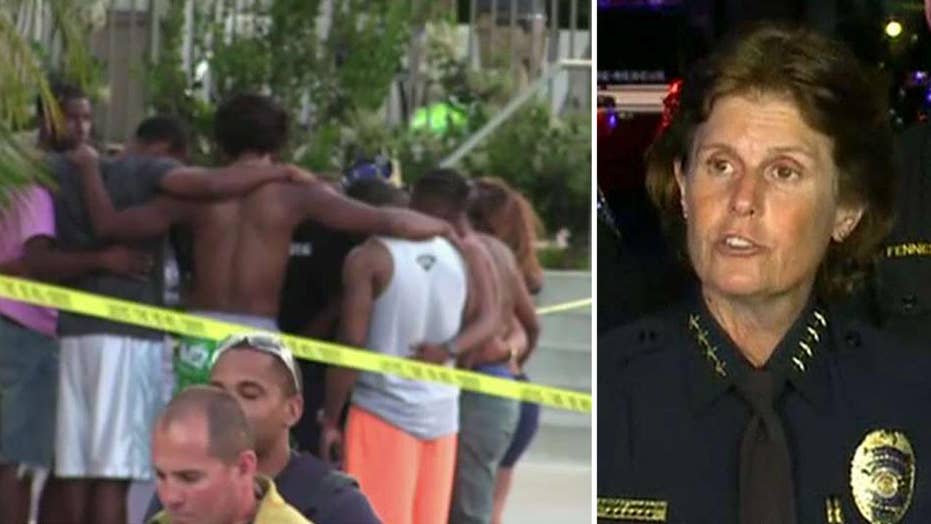 The killer who opened fire at a pool party in San Diego called his ex-girlfriend during his rampage so she could hear the panic and chaos that he was causing, police revealed Monday, giving new details about the gunman's state of mind.

Peter Selis, 49, shot seven people, killing one woman, police said. Officers shot and killed Selis after he fired at a police sergeant, according to investigators. Another man suffered a broken arm while running from the chaos.

The gunman had broken up with his girlfriend days earlier, Police Chief Shelley Zimmerman said at a news conference Monday. She said relatives were aware that he was "depressed" -- but had no idea he'd completely snap.

Selis was sitting on a lounge chair at the pool when he called his ex and told her he'd shot two people, and that police had just arrived. He apparently wanted her to keep listening as he kept firing, Zimmerman added.

Selis shot four black women, two black men and one Latino man, police said. The gunman was white; however, Zimmerman said there was "zero indication" race played a factor in his decision to open fire.

FOUR DEAD, INCLUDING GUNMAN, AFTER SHOOTING AT KANSAS HOME

The killer seemed unfazed during his rampage, witnesses said. Shahrayar Jeff told the San Diego Union-Tribune he learned from his 8-year-old granddaughter that the gunman was sitting and drinking a beer and “relaxing and shooting.”

All of the remaining wounded were expected to survive, although two were in critical condition, Zimmerman said.

Selis had filed for bankruptcy in 2015, the newspaper reported. The filing showed he was a car mechanic and a father. He and at least one of the partygoers apparently lived at the complex not far from the University of California, San Diego, Zimmerman added.

Zimmerman said a police helicopter arrived to the scene in the upscale neighborhood of La Jolla at around 6:07 p.m. local time. The pilot reported seeing multiple victims on the ground and that Selis was still in the pool area holding a large-caliber handgun and appeared to be reloading.

Rikky Galiendes, 27, heard the gunshots and went to look outside his sixth-story apartment when he spotted a man bleeding and running near the pool below. Galiendes told The Associated Press that he called out to ask if the man needed help when his roommate grabbed him, yanked him down and then pointed toward a man sitting in a chair with a gun.

"When we looked over the balcony, he was just sitting down with a gun on his lap," Galiendes said. "He was calm, you know. I mean from my perspective, the guy was ready to do whatever he was going to do. He shot at people having a good time and having a party."