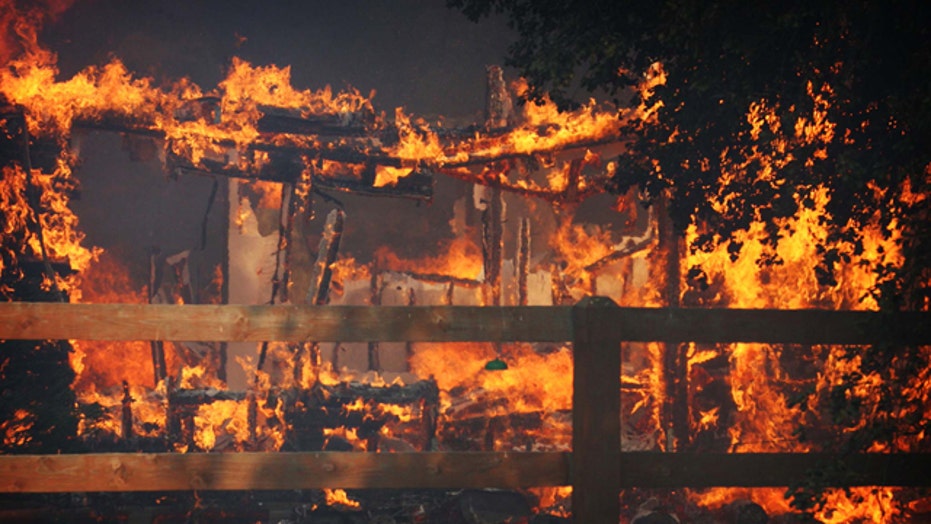 BEAUMONT, Calif. – A growing wildfire chewed through a rugged Southern California mountain range on Thursday, damaging buildings, threatening as many as 600 homes and forcing some 1,500 people to flee.

A thousand firefighters, 13 helicopters and six air tankers battled the flames as they pushed eastward along the San Jacinto Mountains, a desert range 90 miles east of Los Angeles, said Daniel Berlant, a spokesman for the California Department of Forestry and Fire Protection.

The fire was estimated at 15 1/2 square miles Thursday, growing roughly 6 square miles overnight, with 10 percent containment. "Unfortunately the size of this fire continues to take away any progress that we're making," he said.

Fire officials estimated 15 structures burned, but could not say how many of them were houses.  A civilian with what was described as body burns was flown to a hospital, he said. Four firefighters suffered unspecified injuries.

Residents told of fast-moving flames that left little time to get out after the fire erupted Wednesday afternoon.

In the hardscrabble desert town of Cabazon, hundreds were evacuated in the pre-dawn hours Thursday as the mountain ridge behind their homes glowed red. Many returned after sunrise to pack up more belongings and watch the flickering line of fire snaking up and down the brown, scrubby mountains.

Linda Walls, 62, sat with her family in lawn chairs and watched fire crews scrambling to douse the flames marching toward her modest home less than a quarter mile away. An American flag flapped in the gusty wind that kicked up the fire. She wiped her brow, feeling the scorching heat.

Gray and pink-tinted clouds billowed across the otherwise crystal blue sky. Neighbors could be heard coughing as they filled the beds of pickup trucks with motocross bikes, boxes of clothing, toys and packaged food.

"It seems to be taking off now," she said as sirens whirred by. "All you see are the firemen inside the blaze."

At the end of her street, a group of ostriches paced in their cages as the hill above them burned. A firefighter rushing by said they would do what they can to protect them. Nearby another pen was filled with goats.

In the nearby town of Banning, Lili Arroyo, 83, left with only her pet cockatiel, Tootsie, in its cage and a bag of important papers from her home, which was rebuilt after being destroyed in a 2006 wildfire.

"The smoke was so bad you couldn't see," said Arroyo, who lives in the town of Banning. "There were embers and ash coming down all over the sky. The smoke was really thick. I was starting not to be able to breathe."

Evacuation orders covered an RV resort called the Silent Valley Club, the rural communities of Poppet Flats, Twin Pines, Edna Valley and Vista Grande, portions of the city of Cabazon along Interstate 10, and a camping area known as Black Mountain.

A veteran of many evacuations, Dana Wright, 43, wiped away a tear as she entered a shelter at a Beaumont school and went with her family to watch TV news. She had no idea whether her Poppet Flats home of 11 years had survived. Friends said a nearby home had burned.

"This is the closest I've ever heard the fire being near our home," she said.

She and her husband hoped to find a way back up into the mountains. "I just want to look to see if we have a house," she said.

Most of Southern California's severe wildfires are associated with Santa Ana winds caused by high pressure over the West that sends a clockwise flow of air rushing down into the region.

This week's fire, however, was being fanned by a counter-clockwise flow around a low pressure area over northwest California.

Berlant said there was concern that weather conditions could change Thursday and send the flames in a new direction.

U.S. Sen. Barbara Boxer, D-Calif., who had planned a meeting Thursday with state and federal fire officials on the California fire season, planned to tour the wildfire area later in the day.

It was the second major wildfire in the San Jacinto Mountains this summer. A blaze that erupted in mid-July spread over 43 square miles on peaks above Palm Springs, burned seven homes and forced 6,000 people out of Idyllwild and neighboring towns.

The latest fire also burned in the footprint of the notorious Esperanza Fire, a 2006, wind-driven inferno that overran a U.S. Forest Service engine crew. All five crew members died. A man was convicted of setting the fire and sentenced to death.