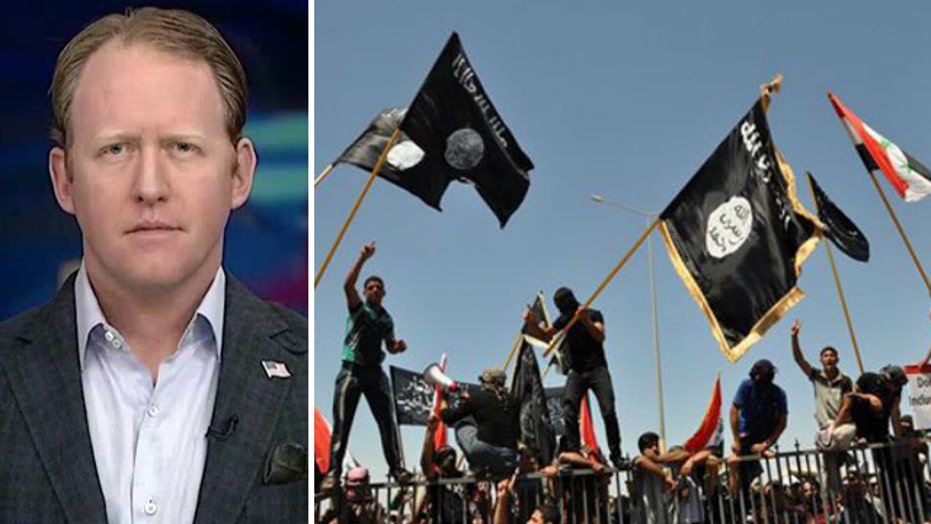 A grim online warning from a self-described American jihadist said Sunday's terror attack in Texas was the work of ISIS and that the terrorist group has scores of "trained soldiers" positioned in 15 states, awaiting orders to carry out more operations.

“Out of the 71 trained soldiers 23 have signed up for missions like Sunday, we are increasing in number."

The warning, which was posted on a file-sharing site, could not be verified, but was signed by Abu Ibrahim Al Ameriki. That name matches the moniker of a shadowy American known to have joined a terrorist group in Pakistan several years ago and who has appeared in propaganda videos before. The chilling threat named five of the states where it is claimed that ISIS has terror cells in place.

“Out of the 71 trained soldiers 23 have signed up for missions like Sunday, we are increasing in number," read the warning. "Of the 15 states, 5 we will name… Virginia, Maryland, Illinois, California, and Michigan.”

An intelligence source told Fox News U.S. officials were assessing the threat, but does not believe it came from ISIS leadership. It may have come from an opportunist such as a low-level militant seeking to further capitalize on the Garland incident, the source said.

Although Sunday's attack at a "Draw the Prophet" Muhammad contest in Garland was thwarted when a traffic cop helping to provide security at the event shot both attackers dead, the posting seemed to claim the operation was successful.

"The disbelievers who shot our brothers think that you killed someone untrained, nay, they gave you their bodies in plain view because we were watching,” read the post.

Another posting linked to ISIS on Tuesday night paid homage to the attackers and used news footage crudely spliced together with words of praise for Elton Simpson and Nadir Soofi, the Phoenix roommates who authorities say drove 1,100 miles from their apartment to carry out the failed attack. Simpson, 31, was an American Muslim convert who appears to have become radicalized over the last decade and Soofi, 34, a Pakistani-American, grew up in a Muslim family in Texas.

The Islamic State group, also known as ISIS, claimed responsibility for the attack in an audio statement Tuesday. The statement on the extremist group's Syria-based Al Bayan radio station called the men "two soldiers of the caliphate."

In February, FBI Director James Comey said the FBI is investigating suspects with ties to ISIS in 49 states, but that number is believed to include self-radicalized Americans who have followed jihadist websites but don't have direct links to the group.

“We are focused keenly on who would be looking to travel to join this band of murderers who will have come back from Iraq and Syria and to the United States,” Comey said in a speech to law enforcement officers in Mississippi. “We have opened cases all over the place focused on this threat, so it is not … a Washington thing – it is something we focus on throughout the FBI.”

Simpson was flagged by the FBI in 2010 for trying to join extremists in Somalia and more recently for tweeting on behalf of the Islamic State. He tweeted about the attack before it happened and praise for his involvement — and additional oblique threats of attacks in the U.S. — spread quickly among ISIS tweets. A counterterrorism source told Fox News Tuesday that data mining in the wake of the Texas attack has revealed a striking connection between at least one of the gunmen and established twitter handled overseas, suggesting that ISIS operatives had knowledge of the attack beforehand, and that the same fighters mentored or encouraged at least one of the shooters.

The new warning said more attacks on American soil will come over the next six months, as ISIS attempts to extend its so-called caliphate to the U.S. It also named Pamela Geller, the anti-Islamist head of the American Freedom Defense Initiative who organized Sunday's event. A $10,000 prize was awarded to the cartoonist judged to have drawn the best picture of Muhammad, whose image is forbidden in Islam from being created or viewed.

“The attack by the Islamic State in America is only the beginning of our efforts to establish a wiliyah [province] in the heart of our enemy," read the warning. "Our aim was the khanzeer Pamela Geller and to show her that we don’t care what land she hides in or what sky shields her; we will send all our Lions to achieve her slaughter."

A U.S. intelligence source told Fox News the threats, including the specific one against Geller, were being taken seriously.

"The U.S. takes any threat to its citizens and our national security seriously, and we expect ISIL and its supporters to continue their efforts to incite fear and encourage lone wolf attacks around the world," the spokesman said.

On Tuesday, White House press secretary Josh Earnest acknowledged today that Garland was “what appears to be an attempted terrorist attack.”

The online warning came as more details emerged about the two homegrown terrorists. The families of Simpson and Soofi say they were shocked by what happened and never saw any signs that either of them was capable of such violence.

Simpson, who was born in Illinois, was arrested in 2010 after being the focus of a four-year terror investigation. But despite amassing more than 1,500 hours of recorded conversations, including Simpson's discussions about fighting nonbelievers for Allah and plans to link up with "brothers" in Somalia, the government prosecuted him on only one minor charge — lying to a federal agent. He was sentenced to three years of probation and ordered to pay $600 in fines and court fees.

It's unclear at what point in his life Simpson turned radical, nor was it immediately clear when or how he met Soofi.

Soofi did not appear to leave as big an online footprint as Simpson. However, according to a Facebook account that has now been disabled, the 34-year-old had a longstanding hatred of police and had studied overseas in Pakistan.

Soofi, who was born in the Dallas area, was an undergraduate pre-medicine major at the University of Utah from fall of 1998 to the summer of 2003, said university spokeswoman Maria O'Mara. She said he did not earn a degree.