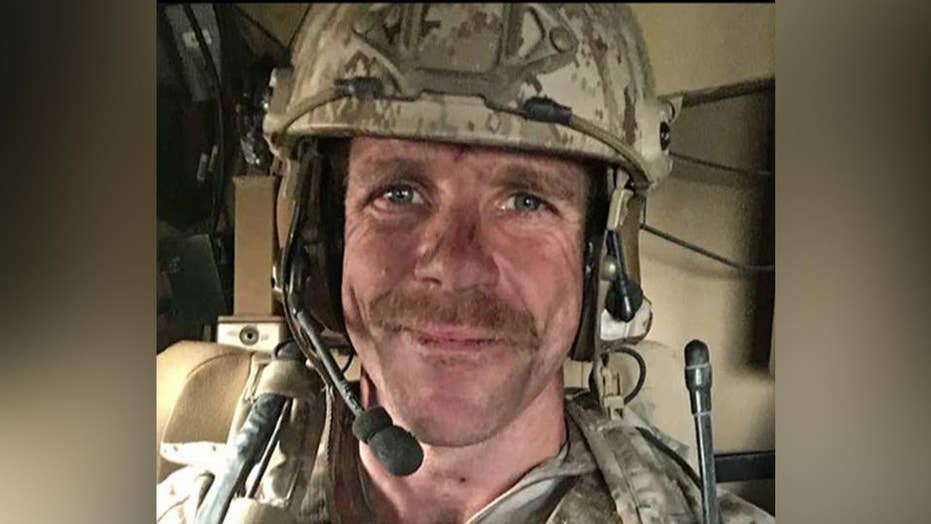 SAN DIEGO – The lead prosecutor of a decorated Navy SEAL charged with killing a wounded teenage ISIS prisoner under his care in Iraq and other war crimes described the defendant in his opening statement Tuesday as a murderer who was out for blood.

Navy Lt. Brian John claimed that Special Operations Chief Edward Gallagher was ready to kill even before coming in contact with the detainee, quoting him as telling his platoon mates: "No one touch him, he's mine" upon learning the prisoner was an ISIS member.

Prosecutors say that Gallagher stabbed the detainee to death shortly after performing the field equivalent of a tracheotomy and after other SEAL team members had left the scene. Lt. John showed the seven-man jury a picture of the ISIS prisoner’s body sprawled out on the ground. A second photo showed platoon members posing with the body on the ground in front of them.

The defense, however, painted the 19-year veteran as a target of his lower-ranking SEAL colleagues, who “banded together” to take out Gallagher because he believed they were cowards who were only there for a “resume booster.”

"This case is not about a murder. It's about a mutiny," said lead defense attorney Timothy Parlatore in his opening statement. "He [Gallagher] didn't murder anyone." The defense attorney said that the ISIS prisoner had ridden around in a Humvee for a couple of hours after being wounded without receiving medical care. Parlatore said that led to the prisoner’s death, not anything Gallagher did.

After the prisoner's death, according to the prosecutor, lower ranking SEAL members held a meeting. “We’re not maybe good with this,” they said, according to Lt. John. At some point, Gallagher allegedly walked into that meeting and said, “I thought everyone would be cool with it."

NAVY SEAL RELEASED FROM CUSTODY AHEAD OF MURDER TRIAL

Subsequently, the prosecutor said that Gallagher began to "systematically intimidate the SEALs from reporting."

"He’s ready to kill motherf---ers who report him,” Lt. John said of Gallagher, adding that the defendant sent texts calling them names, such as "cowards in combat" in an attempt to "get the word out about these rats. And that’s what he called them."

“Why would members of a SEAL team lie about their chief?” defense attorney Parlatore asked in his statement before providing the answer: Because he called the SEAL team members “cowards.”

"Eddie Gallagher didn’t want to sit back. He wanted to get in the fight. And that’s what brought the complaints,” Parlatore said.

The all-male jury is made up of four enlisted Marines, one enlisted sailor and one officer each from the Navy and Marines. Most of the jurors have served in conflicts in Iraq and Afghanistan.

Gallager is also accused of wounding two civilians — an elderly man and a school-age girl — in sniper shootings in Iraq in 2017. He has pleaded not guilty to murder and attempted murder — charges that carry a potential life sentence. His defense has been championed by his family and some congressional Republicans who have claimed that he's a hero getting railroaded.

President Trump even intervened to get Gallagher removed from the brig as he awaited trial and is said to be considering a pardon for him.

The case has been plagued by news leaks of court documents and a subsequent investigation to find the source of those leaks. The lead prosecutor was removed from the case earlier this month for tracking the defense team's emails as part of an investigation into the leaks.

Defense lawyers unsuccessfully sought to have a Navy judge, Capt. Aaron Rugh, dismiss the case because they say investigators and prosecutors withheld evidence that could help Gallagher and violated his rights to a fair trial by embedding tracking software in emails sent to them.

Rugh responded by taking steps to ensure Gallagher gets a fair trial and fix violations of his constitutional right against illegal searches and the right to counsel. The judge released Gallagher from custody, removed the lead prosecutor and reduced the maximum penalty he faces if convicted, to life imprisonment with parole instead of no chance of parole.