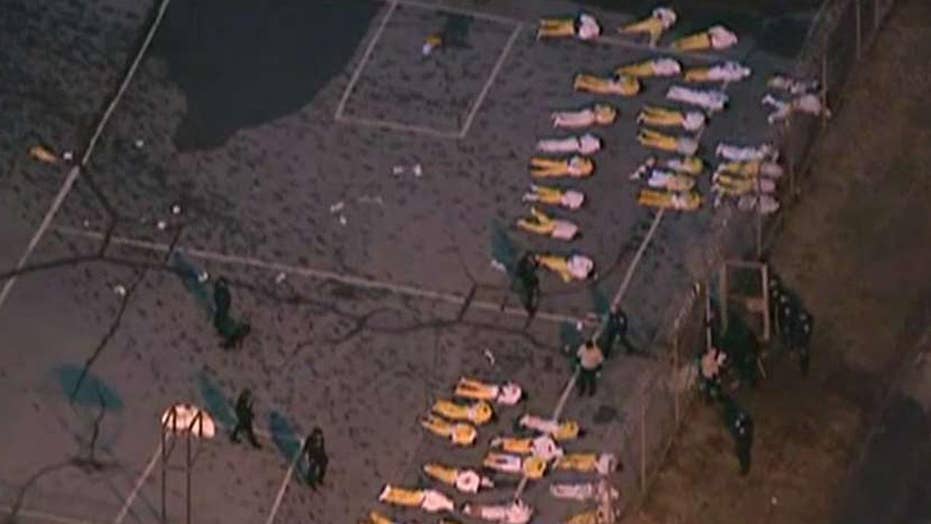 WILMINGTON, Del. – The family of a guard killed during a prison riot and five other officers who survived the inmate uprising sued the state of Delaware in federal court on Tuesday, accusing officials of ignoring security and staffing problems.

The lawsuit claims state officials have failed to meet their obligation to provide adequate staffing and safe working environments within Delaware's prisons.

Inmates took four correctional workers hostage at the maximum-security Vaughn Correctional Center in Smyrna in February, setting off a nearly 20-hour standoff during which correctional officer Steven Floyd was killed.

The siege ended when tactical teams used a backhoe to breach the building and rescue a female counselor. Two other guards had been released earlier after being tormented and beaten by inmates. Three other correctional workers locked themselves in a basement for hours before climbing to an attic and onto a roof, where they were rescued.

"The complaint charges that this calamity is all due to the dereliction of duty by these two governors, and their appointees," plaintiffs' attorney Thomas Neuberger said in a prepared statement.

If there had been adequate staffing at Vaughn Correctional Center, the inmates would not have been able to overpower the officers, take control of the building and kill Floyd, the president of the Correctional Officers Association of Delaware has said.

Union members say chronic understaffing has left prison guards badly outnumbered and unable to ensure operational security. The union has argued for years for increasing pay and benefits so that more officers can be recruited and retained, ending a heavy reliance on forced overtime to meet minimal operating needs.

According to the lawsuit, overtime costs during Markell's eight years in office increased from around $13 million a year to $23 million a year, even as vacant positions went unfilled.

While Gov. John Carney, who took office in January, is not named as a defendant, the lawsuit alleges that he violated prison policy by intervening in the emergency response to the uprising.

According to the DOC policy manual, the warden is the "ultimate commander" in the event of a major emergency and is in charge until the situation is resolved.

The complaint alleges that Warden David Pierce had given the green light to a prison emergency response team to retake the building and rescue the hostages within an hour of the start of the uprising, but "the governor instead intervened, "overruled the warden and halted the rescue attempt, for presently unknown reasons."

The complaint says the warden, who has since been reassigned, was "enraged" by the governor's intervention.

The lawsuit notes that the plaintiffs have been unable to determine when Floyd's death occurred because of Carney's refusal to release autopsy results to his family.

In response to a query from The Associated Press, a Carney spokesman last month denied that the governor had made any decisions during the emergency response.

"The governor trusted his law enforcement team on the ground to make decisions on how best to respond throughout the incident," Carney spokesman Jon Starkey said in an email.