Chicago Dem to Ingraham: Lori Lightfoot’s new normal is that everyone in Chicago should live in fear.

An upscale Chicago neighborhood is looking for answers after a recent string of crimes in the area put community members on edge.

"Like so many, we are disturbed and upset about the recent uptick in crime in our neighborhood and across the City of Chicago," Faraz Sardharia, president of the Wrightwood Neighbors Association (WNA), an organization for residents of the city's tony Wrightwood Neighbors area told Fox News Digital in a statement. "Violence, threats, and theft are unacceptable. They must be stopped. We hope to continue to engage with the Chicago Police Department, government officials, and our neighbors to ensure the safety of our community."

"What happened to my brother was a senseless act of violence," Earley's brother, DaShawn Earley, told Fox News Digital in a statement at the time. "He was shot and left to die over a bag and a cellphone. We have to stop treating peoples lives like they are nothing. He has a family who loves him and wants more than anything for him to pull through. We are praying he makes it and that we get justice for those who committed this heinous act." 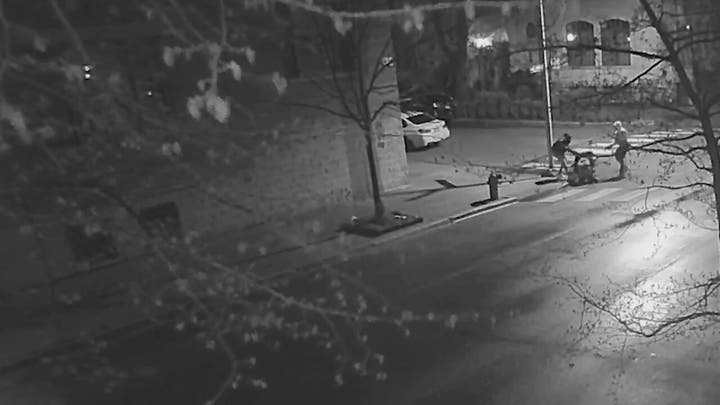 The Chicago Police Department (CPD) told Fox News Digital that "detectives are investigating the shooting to be related to a robbery which happened in the 1100 block of West Fullerton," on DePaul University's campus, on Friday around 3 a.m.

Additionally, surveillance video obtained by WGNNews appears to show multiple suspects on Monday stealing catalytic converters from vehicles on West Webster Ave, where Earley was shot last week. CPD said it did not receive any theft reports from that area on May 9.

The median home price in Wrightwood Neighbors, as well as in nearby Lincoln Park, is about $600,000, according to Realtor.com

Police have recorded five murders in the 19th police district, where Wrightwood Neighbors and Lincoln Park are located, compared to zero murders at the same time last year. Authorities have also recorded a 23% uptick in robbery complaints year-over-year, a 56% increase in assault complaints, a 27% rise in burglary complaints and a 73% surge in theft complaints for the week starting May 2 and ending May 8.

A driver returns to a FedEx Corp. Ground truck in the Lincoln Park neighborhood of Chicago, Illinois, U.S., on Monday, Nov. 30, 2020.  (Christopher Dilts/Bloomberg)

Additionally, police have seen a 125% increase in motor vehicle theft complaints, with 196 incidents reported this year compared to 87 at the same time last year.

Chicago Mayor Lori Lightfoot on Wednesday announced that the city has launched a free, voluntary program for anyone who lives in or owns a business in Chicago to register their security cameras with CPD.

"Residents who have a private security camera that captures the public way can register its location w/ the @Chicago_Police to help solve crime faster," she said in a Wednesday tweet.

On top of the violence, city law enforcement is feeling the strain of staffing shortages. CPD has already canceled officers' days off ahead of Memorial Day weekend in anticipation of violence. Some officers may work 12-hour shifts that weekend if necessary, law enforcement officials told WLS.

The force has lost more officers than it has gained every year since 2019. Between January and October 2021, 900 officers left CPD while only 51 joined the Department, the outlet reported.