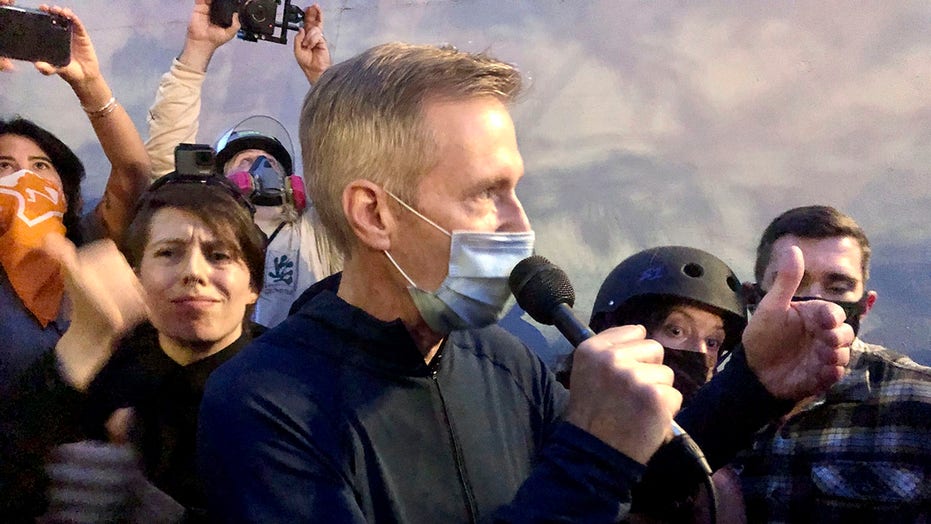 Portland Mayor Ted Wheeler on Tuesday said he has authorized police to use "all lawful means" in ending an illegal occupation at a home in the city.

Protesters have rallied at the private North Portland residence for months to demonstrate against the eviction of a Black and Indigenous family, according to reports.

"I am authorizing the Portland Police to use all lawful means to end the illegal occupation on North Mississippi Avenue and to hold those violating our community’s laws accountable," Wheeler wrote on Twitter Tuesday night.

The Multnomah County Sheriff’s Office (MCSO), with the assistance of the Portland Police Bureau (PPB), made at least seven arrests and cleared people on Tuesday morning who they said have been trespassing for months at the "Red House on Mississippi."

The alleged trespassers had been ordered to leave the property following a court order in September.

After the arrests were made, at least 100 demonstrators gathered outside the home on Tuesday evening and proclaimed it the “Red House Autonomous Zone," according to Oregon Public Broadcasting. The protesters created makeshift barricades to prevent the ouster of the family who owned the home for decades.

Wheeler shot back on Tuesday night, declaring that: "There will be no autonomous zone in Portland."

Earlier on Tuesday, police said they blocked off streets and sidewalks surrounding the property, which led to clashes between law enforcement and protesters in the area. Demonstrators threw objects at officers and police vehicles, and at least two vehicles had their tires flattened, while others saw their windows smashed, authorities said.

A crowd of people also used fencing and other materials to block North Mississippi Avenue, according to the PPB. One of the people at the property had a gun and was taken into custody, a police statement said. Officers also found more guns on the property.

"It’s time for the encampment and occupation to end," Wheeler added. "There are many ways to protest and work toward needed reform. Illegally occupying private property, openly carrying weapons, threatening and intimidating people are not among them."

PORTLAND HOME STRUCK BY OVER 50 BULLETS, AS POLICE RESPOND TO MULTIPLE SHOOTINGS OVER LAST 3 DAYS

The house went into foreclosure and was sold to a developer at a 2018 auction, according to the group.

The family's case gained notoriety this year amid protests against racial injustice. The home sits within a historically Black residential neighborhood that is now gentrified, the paper reported.

Wheeler on Tuesday said there was a "lengthy, thorough judicial proceeding resulting in a lawful judge’s order to evict people illegally occupying a home."

Police said between September and November "at least 81 calls for service were placed for issues related to this property," according to data captured by the PPB.

"Calls for service included, but were not limited to, fights, disturbances, shots fired, burglary, thefts, vandalism, noise violations, trespassing, threats, including by armed individuals, and for illegally blocking traffic, sidewalks and access to homes," authorities said.