The police agencies tasked with enacting Oregon's gun control law say they don't have enough time or resources to create a permit-to-purchase system by the Dec. 8, 2022, deadline.

A federal judge on Tuesday ordered the permit-to-purchase portion of Oregon's strict new gun law be delayed 30 days after police said they wouldn't have time to implement the new system.

The ruling will allow Oregonians to purchase firearms without first obtaining a permit for 30 days after Dec. 8, when the rest of Measure 114 is still set to take effect. Those provisions include a ban on ammunition magazines capable of holding more than 10 rounds and background checks for all gun sales.

Judge Karin J. Immergut issued the stay "in light of the difficulty the State has conceded in terms of implementation of the permitting provisions at this stage," she wrote in the 43-page ruling, the Oregonian reported.

The state's attorney general had asked Immergut on Sunday night for a two-month extension of the law's training requirement — part of the permitting process — after police said they would not be prepared to issue permits by Dec. 8, meaning all gun sales would cease.

A federal judge has ordered the permit-to-purchase portion of Oregon's strict new gun law be delayed 30 days after police said they wouldn't have time to implement the new system. (George Frey/AFP via Getty Images)

Police in Oregon had hoped Immergut would grant a delay to give them enough time to create and implement a permit-to-purchase system without any hiccups.

"An opportunity to kind of take a step back and really work on the mechanics of what we need to do to fulfill ballot Measure 114, that would be a huge gift to us in this holiday season," Eugene Police Chief Chris Skinner told Fox News.

"One of the nuances of this ballot measure that's really unclear to us is who's responsible to do that training," said Skinner, who serves as president of the Oregon Association Chiefs of Police, which represents police agencies across the state.

The Oregon State Sheriffs' Association "is not aware of any training program that is currently available and meets all of Measure 114's strict requirements," the organization's executive director, Jason Myers, wrote in a statement to the court. 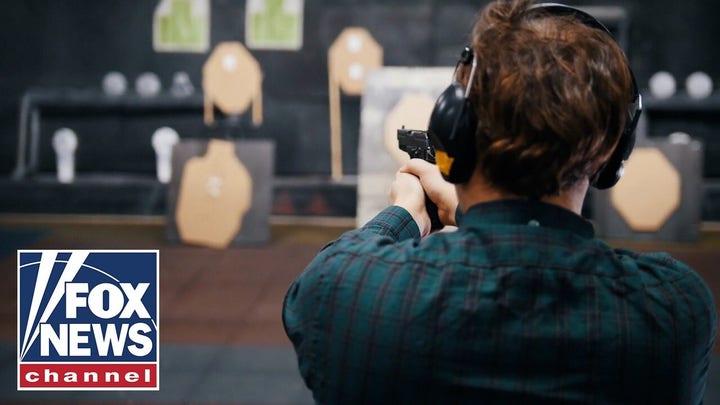 That argument convinced the Oregon Department of Justice to ask the judge to allow Oregonians to complete firearms purchases without a valid permit for two months but keep the Dec. 8 start date for all other parts of the measure, including restrictions on large capacity magazines and the process of applying for a permit.

"Postponement of just the training requirement isn't going to be enough for us to meet the Dec. 8 deadline," Skinner said. "We still need to figure out what a uniform application looks like."

Immergut also heard arguments Friday relating to the first of several lawsuits challenging the constitutionality of the measure. She said in her Tuesday ruling that the plaintiffs failed to show that Measure 114 would cause "immediate and irreparable harm."

The measure mandates instruction on state and federal gun laws, safe storage, the effect of suicide and homicide on communities, how to report lost or stolen firearms, as well as an in-person demonstration of locking, unloading, firing and storing a gun.

Myers wrote that local law enforcement agencies don't have the staff to process applications quickly. He expects it will take "many months" before the system can process permits quickly enough to meet demand.

Voters approved Measure 114 last month by a slim margin after its proponents argued it would reduce violent crime, accidental deaths and suicides.

"We were caught off guard a little bit with respect to how quickly the implementation deadline was going to come up," Skinner said. "I'm not sure there's an agency in a state that's going to be able to meet that deadline."

Police originally expected the law to take effect no sooner than 30 days after the election was certified, Skinner said, which would have given them until January 2023.

But according to a spokesperson for the secretary of state's office, the Oregon Constitution states that measures take effect 30 days after they are approved by voters, which has traditionally been interpreted as 30 days after election day.

Prior to the ruling, if a delay was not granted, Skinner asked residents to be patient with police and know that they're working hard to get a permit system in place.

"Throughout my entire department, I'm short-staffed," he said. "And I know that many chiefs from around the state are feeling that same pain when it comes to trying to hire and retain people to do the work that we have now."