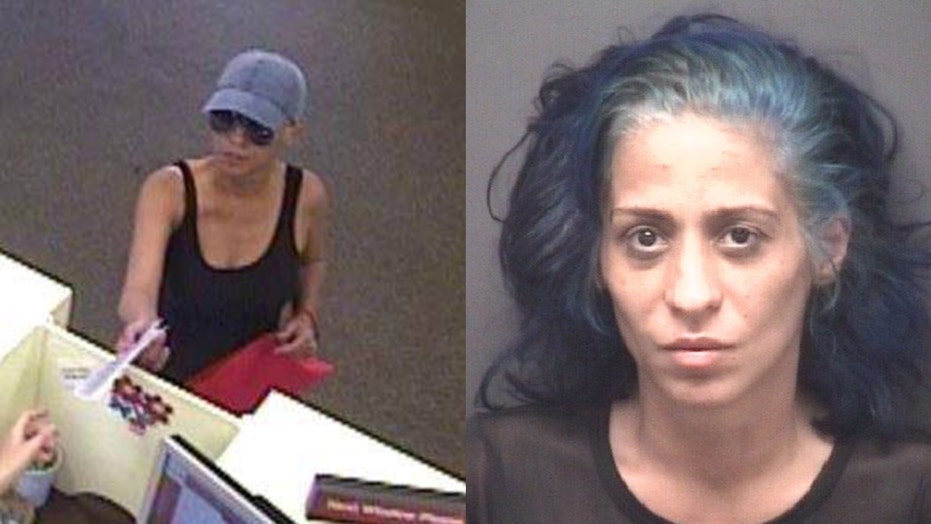 The suspected “Pink Lady Bandit” -- wanted in connection with a string of bank robberies in three states -- was arrested Sunday, the FBI announced.

Circe Baez, 35, was arrested at a hotel in Charlotte on suspicion of robbing four banks, the most recent robbery occurring Friday, authorities said.

“The Pink Lady is changing her trademark to an orange jumpsuit,” the Pitt County Sheriff’s Office said Monday.

The FBI said it arrested Circe Baez, 35, Sunday in Charlotte and charged her with being the "Pink Lady Bandit" bank robber.  (FBI/Pitt County Sheriff's Office )

The FBI also arrested Alexis Morales, 28, as an accomplice in the Friday robbery, which took place at a BB&T branch in Hamlet, N.C., according to FOX8 High Point.

“Evidence gathered during the course of the investigation by the FBI... led agents and task force officers to identify Circe Baez as the woman who robbed at least four banks,” the FBI said, according to the Charlotte Observer. “Agents and officers uncovered additional evidence after the robbery in Hamlet, North Carolina, to identify Morales as an accomplice to the crimes.”

Alexis Morales, 28, is believed to have been an accomplice in Friday's robbery, police said.

Tellers at the banks in Pennsylvania, Delaware and North Carolina were handed notes by the bank robber, demanding money.

A bright pink handbag the bandit showed up with at two of the banks led to the thief getting her nickname.