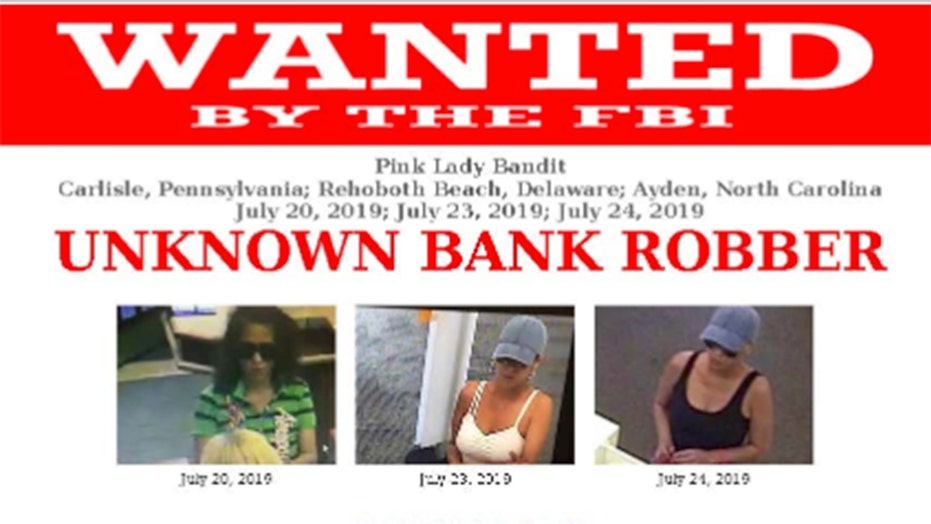 The Federal Bureau of Investigation (FBI) is on the hunt for a serial bank robber known as the Pink Lady Bandit who is said to have robbed four banks in three states along the East Coast.

The Federal Bureau of Investigation is on the hunt for a serial bank robber known as the "Pink Lady Bandit" who is said to have robbed four banks in three states on the east coast. (FBI Charlotte)

FBI Charlotte announced on Saturday that the unknown woman had struck a fourth bank in Hamlet, N.C., and is offering a reward of up to $10,000. They tagged FBI Baltimore and FBI Philadelphia in the post.

The woman is nicknamed the Pink Lady Bandit because of the signature pink handbag she carried during two of the robberies committed over the past eight days, according to the FBI.

The FBI describes her as a white or Hispanic woman roughly 5 feet, 2 inches  to 5 feet, 4 inches tall and weighing 130 pounds. They say in two of the robberies she wore yoga pants, tank tops, a navy baseball hat, and her distinctive pink handbag.

The timetable for her crime spree began at Orrstown Bank in Carlisle, Pa., on July 20 before she decided to cross state lines and hit the M&T Bank in Rehoboth Beach, Del., on July 23. A day later, she crossed state lines again and robbed the Southern Bank in Ayden, N.C.

In her most recent heist, the FBI says she stayed in North Carolina and held up BB&T bank in Hamlet, roughly a three-hour drive from Ayden and an hour and a half away from Charlotte.

In each robbery, she simply showed the teller a note that demanded money.