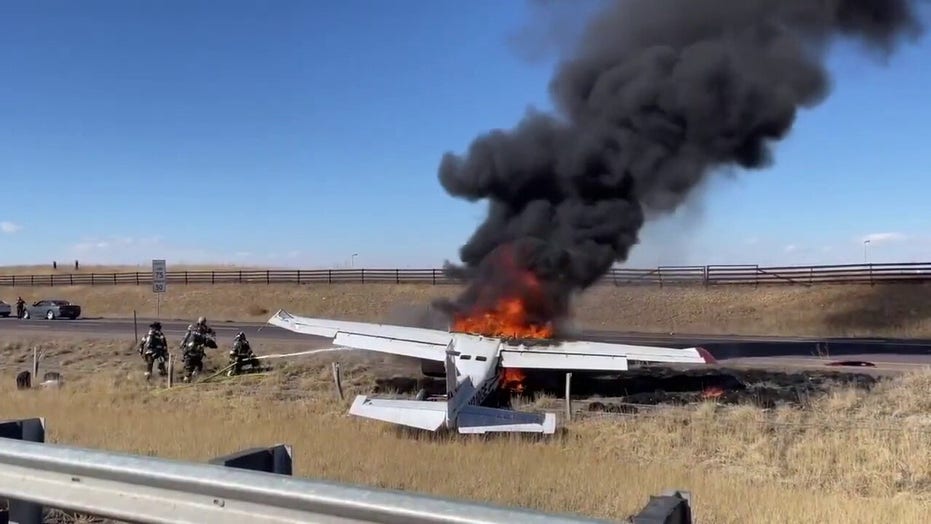 A pilot and passenger survived a fiery plane crash on a Colorado highway near an airport on Tuesday, fire officials said.

A pilot and passenger survived a fiery plane crash on a Colorado highway near an airport on Tuesday, fire officials said.

The Cessna P210N single engine, six passenger aircraft went down on E-470 just south of Centennial Airport, South Metro Fire Rescue (SMFR) officials said. The aircraft, which was heading to the airport from Dodge City, Kansas, avoided hitting any cars on the roadway.

The two occupants on board safely evacuated the burning aircraft and were treated for minor injuries.

"Sometimes we have to look for small miracles, and today the small miracle is that the pilot and passenger were able to walk away," a SMFR public information officer said, according to FOX31 Denver.

Video from the scene shows flames and billowing black smoke as firefighters work to extinguish the burning aircraft and its fuel.

Hazmat crews with SMFR and the Colorado State Patrol drained fuel and water from the plane’s wing tanks to make it safer to move, while an environmental cleanup service worked to contain the fuel spill, officials said.

The charred aircraft was loaded onto a tow truck and removed from the area as officials continue to investigate the cause of the accident.