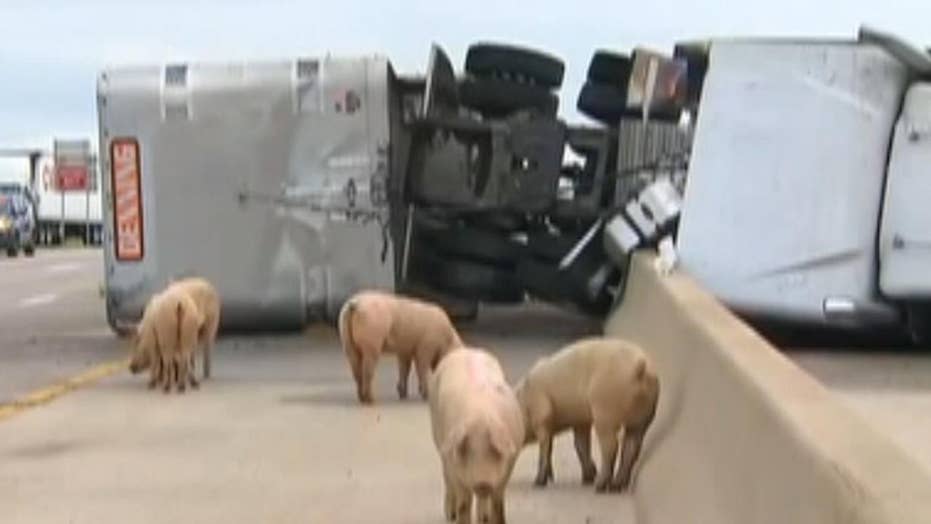 Raw video: Pigs loose on I-45 in Texas, shutting down highway in both directions

A wild scene unfolded on a Texas highway after a tractor-trailer carrying pigs crashed and burst into flames during Thursday morning rush hour, leading more than 100 squealing animals to run loose.

Two 18-wheelers, one loaded with the hogs, and a car crashed on Interstate 45 in Wilmer, south of Dallas, around 6:30 a.m., KTVT reported. The truck tipped to its side and later caught on fire.

Dozens of pigs spilled onto the road and were seen running around traffic.

"We had a total of 195 [on the highway]. We do not know how many dead-loss or how many ran off," Wilmer Police Department Lt. Eric Pon told KTVT.

"The biggest challenge we’ve had so far was just corraling the pigs, keeping 'em from getting into oncoming traffic and getting run over — but I do believe we’ve got all of them," Pon added.

The crash closed the interstate in both directions, snarling traffic during rush hour. No one was injured in the crash.