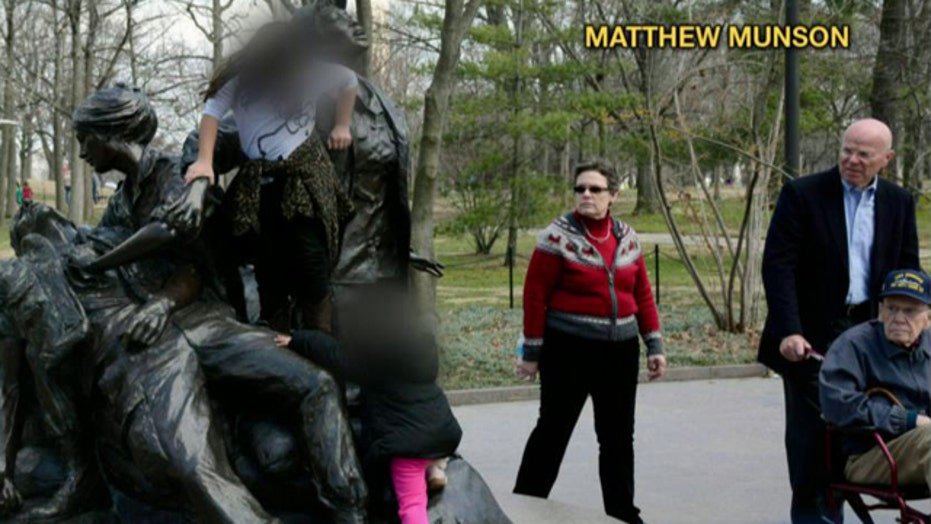 Debate over how children should act at memorials

A photograph of young children treating the Vietnam Women's Memorial in Washington, D.C., like a jungle gym with an elderly man looking on has gone viral and has some veterans shaking their heads.

Matthew Munson, the photographer, took the photo when he saw an elderly man wearing a "USS Emmons" ball cap approach the memorial while the kids were climbing the sculpture that honors the women who served in Vietnam, mostly as nurses.

"I feel like the parents should be ashamed," Munson told MyFox8.com. "And anyone that tries to blame the kids are wrong in doing so. If you look at the hurt veterans, they are looking past the kids and toward the parents that are out of the frame."

Munson told the station that the parents were laughing while the kids scaled the monument, which was dedicated in 1993, showing a woman holding a fallen soldier.

The photo, which appeared on Reddit, sparked debate among users. Some said children should be taught at an early age to treat these sites with a certain level of reverence; others say some veterans take pleasure in seeing the generation that they protected take the simple pleasure of running around at one of these sites.

"He [a WWII veteran] saw it as a way for the next generation to take some joy out of something so terrible and at the same time gave them a link to the past," the commenter wrote, according to The Army Times, noting that some stopped  to read names and eventually look up the history.