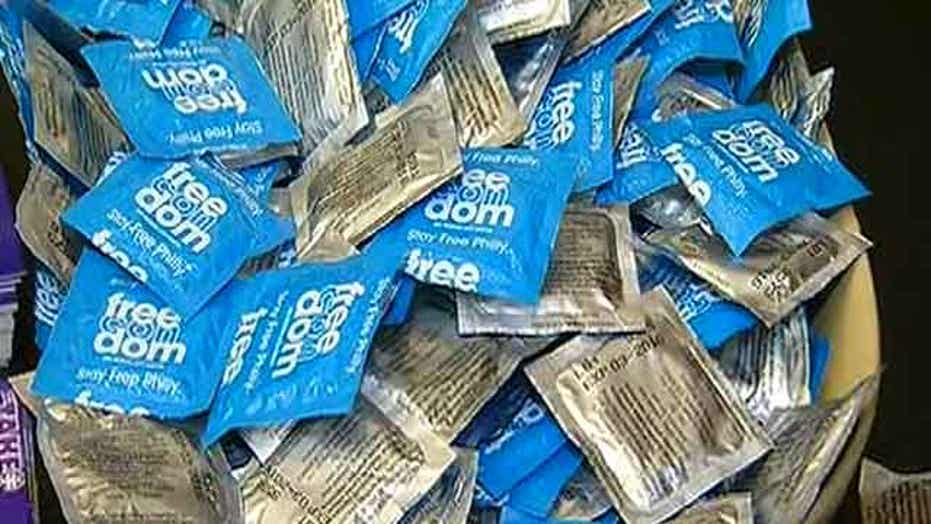 When Philadelphia high school students return from their holiday break, many will find school officials handing out gifts to even the naughty boys and girls: free condoms.

The city is rolling out condom dispensers at 22 high schools, part of what officials say is an attempt to address an alarming public health crisis.

There is "an epidemic of sexually transmitted diseases in adolescents in Philadelphia," Donald Schwartz, deputy mayor for health and opportunity, told Philly.com.

The city has given out 4 million condoms since April 2011, and that has coincided with a drop in STD rates, Philly.com reports, but school leaders are concerned that teens still account for a fourth of new STD cases in the city.

The condoms will be available for free at the third of the city's high schools with the highest STD rates, but only to students whose parents haven't signed a form opting out of the program.

Even so, reaction to the plan has been mixed.

"In today's world, it's a fact that teenagers have sex. And you know, I don't like it," parent Michelle DiSalvatore told MyFoxPhilly.com. DiSalvatore’s daughter attends South Philadelphia High School, one of the schools offering free condoms.

But Dionne Graham, whose 17-year-old son attends Bok High School, is in favor of the idea. "It's a good thing actually because they're doing it …they're having sex. To ignore it is stupid," she said.

MyFoxPhilly.com reports that 12 schools already offer condoms in health resource centers. But over the holiday vacation, dispensers will be installed just inside the nurses offices at 22 schools, making condoms more widely available.

One local family has a difference of opinion between parents.

“That's a good idea because kids are sexually active," mom Elizabeth Lucero says. But her husband, Marvin, doesn’t approve: "I don't agree with it. It's kind of like promoting it, a way of advertising sex."