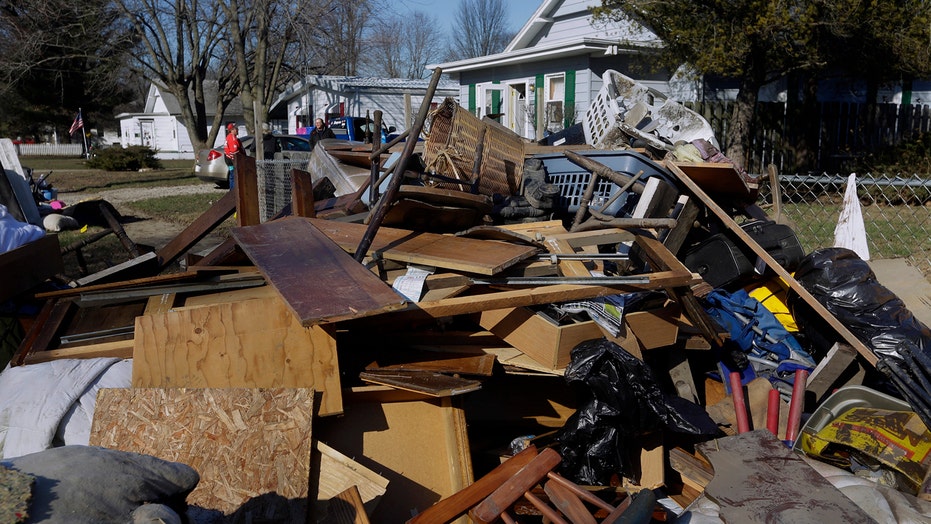 Sharon Stivers mustered a smile as a visitor walked into her muddy yard.

"Welcome to my flood sale," Stivers joked, nodding to a tall stack of water-soaked furniture, appliances and belongings pulled from her home and piled high by the road in the flat central Illinois town of Kincaid. "You can have the whole thing for 50 cents."

The Mississippi River and most other waterways in Missouri and Illinois flooded last week after 10-14 inches of rain fell over a wide swath of the two states. The water receded in most places Sunday but continued to rise in a few. Cleanup and damage assessment was only beginning, and could take weeks.

Twenty-five deaths in the two states were blamed on flooding, nearly all of them the result of vehicles driving over flooded roadways. The death toll rose Sunday when the body of a second teenager missing for several days was found near Kincaid, a town of about 1,400 residents along the South Fork Sangamon River near Springfield.

The Mississippi River was receding except in the far southern tip of both states. After that, flooding is expected to worsen in Arkansas, Kentucky, Tennessee and other southern states, though the breadth of the flooding there isn't expected to match what happened in Missouri and Illinois.

The Meramec River, the St. Louis-area tributary of the Mississippi that caused so much damage last week, already was below flood stage in the hard-hit Missouri towns of Pacific and Eureka and dropping elsewhere, just three days after reaching record levels. The worst was still to come along the Illinois River, where near-record crests are expected early this week in the Illinois towns of Beardstown, Meredosia and Valley City.

Illinois Gov. Bruce Rauner toured flood-damaged homes in Kincaid and urged residents to be careful, noting the rare cold-weather flood carries its own burdens, including the prospect of hypothermia for those wading into water.

Stivers and many of her neighbors spent Sunday removing ruined items from their homes and placing them along the street for trash crews to pick up. Stivers shares a home with a 45-year-old daughter battling breast cancer, along with a granddaughter and four dogs. Floodwaters got 4 feet into their home, located in an area where flood insurance wasn't available.

"I lost my home," Stivers said. "My daughter has cancer and lost her home. Am I mad? When I'm not crying I am."

"In `93 that water came up and stayed on the levees for several months," Simmons said. "This flood came up quick and went down quick."

St. Louis-area cleanup largely was focused around the Meramec. Two wastewater treatment plants were so damaged by the floodwaters that raw sewage spewed into the river. Hundreds of people who had been evacuated in the Missouri communities of Pacific, Eureka, Valley Park and Arnold were cleaning up the mess and filth left behind.

In southeast Missouri, up to 30 homes and several businesses were damaged in Cape Girardeau, a community of nearly 40,000 residents that is mostly protected by a flood wall. The Mississippi peaked at 48.9 feet Friday night, four-tenths of a foot above the 1993 record, but short of the 50-foot mark projected. Nearby levee breaks and toppings in other places kept the crest down.

Amtrak service between St. Louis and Kansas City was back in business on Sunday, four days after high water that reached the tracks at some locations forced the passenger service to be halted.