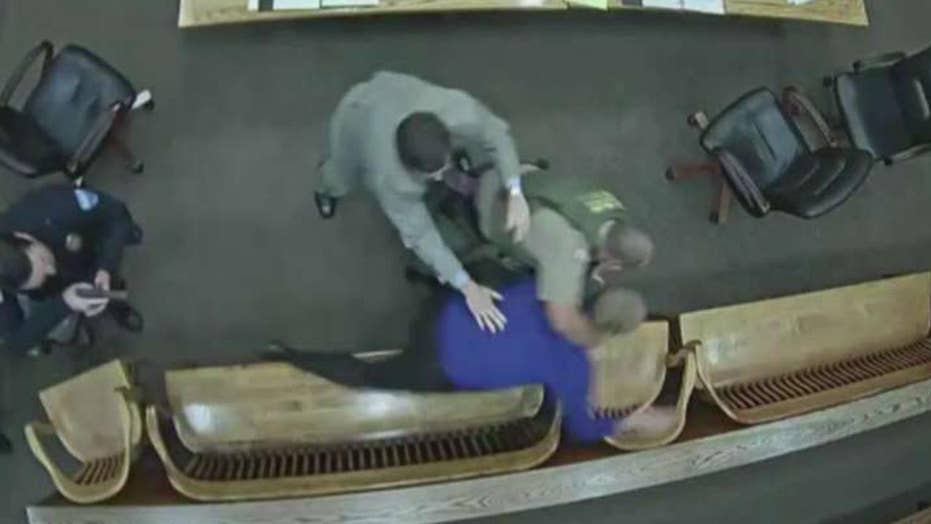 A shocking video captured the moment a defendant on trial Wednesday in Oregon appeared to lunge for a police officer’s gun inside the courthouse after a judge denied the sheriff’s office request to use a concealed restraint on him.

Scott Patrick Lemmon, 27, was on trial for allegations of pointing a realistic-gun at two people at a condo in Newport, OR., and threatening to kill them before robbing them, The Oregonian reported, citing a probable cause affidavit.

Sheriff's spokesman Sgt. Josh McDowall commended the officer’s quick actions to move out of the away and avert a potential crisis.

In May of last year, the 9th U.S. Circuit Court of Appeals ruled in favor of federal public defenders who argued restraints could prejudice a jury against criminal defendants, the paper reported. The court agreed with public defenders again in the second ruling in August of 2017.

A judge denied a request from the sheriff’s office to use an “electronic restraint” on Lemmon that would have been concealed under his pants and not visible to jurors, according to the paper. If Lemmon acted up, officers could have delivered an electric shock to debilitate Lemmon.

Although McDowall acknowledged the shock probably would not have prevented Lemmon from lunging for the weapon, he told the paper it would have been effective if Lemmon had gained control of the gun.

The sheriff’s office plans to tack on additional charges against Lemmon following the incident, according to the paper.