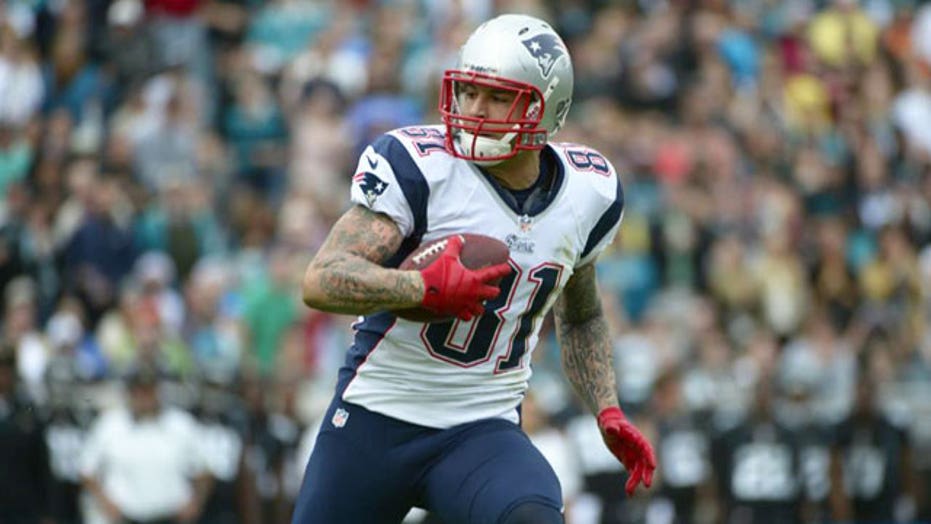 FALL RIVER, Mass. – Aaron Hernandez once seemed to be a man with a bright future. At age 23 he had a Super Bowl appearance under his belt and a $40 million contract as a star tight end with the New England Patriots. He and his fiancee had started a family, living in a mansion in the Boston suburbs with their 8-month-old daughter.

This week, prosecutors will paint a different picture of Hernandez: they will portray him as a killer who orchestrated the shooting of semiprofessional football player Odin Lloyd.

Hernandez was arrested days after Lloyd's bullet-riddled body was found in an industrial park near his North Attleborough mansion. He has pleaded not guilty and, after more than two weeks of jury selection, his trial is expected to kick off in earnest this week with opening statements.

The case will be laid out in the courtroom just as Hernandez's old team prepares for Sunday's Super Bowl, the Patriots' first appearance since 2012, when Hernandez caught a touchdown pass in Super Bowl XLVI. The Patriots cut him less than two hours after he was arrested.

Hernandez, now 25, is also charged with killing two men in Boston in 2012 because he felt disrespected after one of them spilled a drink on him at a nightclub. He pleaded not guilty after being charged in those shootings in May, and the case has not yet gone to trial.

Lloyd, 27, played for the Boston Bandits football team and was dating the sister of Shayanna Jenkins, Hernandez's fiancee. Prosecutors say he and Hernandez were friendly and had been at a nightclub together a couple of days before he was killed.

Prosecutors have said Hernandez and two friends from his hometown of Bristol, Connecticut, picked up Lloyd at his home in Boston's Dorchester section around 2:30 a.m. on June 17, 2013. Those men, Carlos Ortiz and Ernest Wallace, have also pleaded not guilty to murder charges and will be tried separately.

From Dorchester, prosecutors say the four men drove to North Attleborough in a rented Nissan Altima, stopping along the way to buy bubble gum at a gas station. An hour after he left his house, prosecutors say Lloyd was dead, shot multiple times by a .45-caliber Glock. They have not said who pulled the trigger, but say Hernandez orchestrated the killing. The murder weapon has never been found.

Prosecutors have said toll booth, video surveillance, GPS and cellphone records clearly place Hernandez in the car with Lloyd at the time of his murder, and have said video from the security system inside Hernandez's own home shows him walking through his house with a gun minutes after the killing.

Christopher Dearborn, a professor at Suffolk University Law School, says that while the Bristol County District Attorney's office has a lot of circumstantial evidence, its challenge is to offer a motive to jurors. Prosecutors have said a possible motive was that Hernandez may have showed Lloyd the spot where the 2012 shooting took place. But Bristol County Superior Court Judge Susan Garsh last month ruled they may not introduce anything having to do with the 2012 killing in the Lloyd murder trial.

The lack of a clear motive is the biggest weakness in the prosecution's case, Dearborn said.

"You need to give a jury a reason why, or they're going to have pause," Dearborn said. "I don't think they have a motive that they can present in concrete fashion with witnesses that can support a motive."

Hernandez's legal team is likely to focus on the holes, Dearborn said.

Hernandez's team does not have to offer a defense or explanation, or even deliver an opening statement. But Dearborn said he expects to hear one.

"They will absolutely have to have their own narrative," he said. "That narrative will probably suggest alternatives."

Jenkins, Hernandez's fiancee has been charged with perjury for allegedly lying to a grand jury -- including when she said she could not remember what she did with a box prosecutors believe she disposed of after getting what they called a coded message from Hernandez. She has pleaded not guilty.

In the run-up to the trial, Jenkins was often seen in court, and the judge this month granted a request from Hernandez's legal team that she be allowed to attend the trial to support him even though she is listed as a potential prosecution witness.

But two days before the trial began, the district attorney petitioned the judge to grant Jenkins immunity, which would compel her to testify. The court has not said yet whether it was granted.

Jenkins has not been seen in the courtroom since.