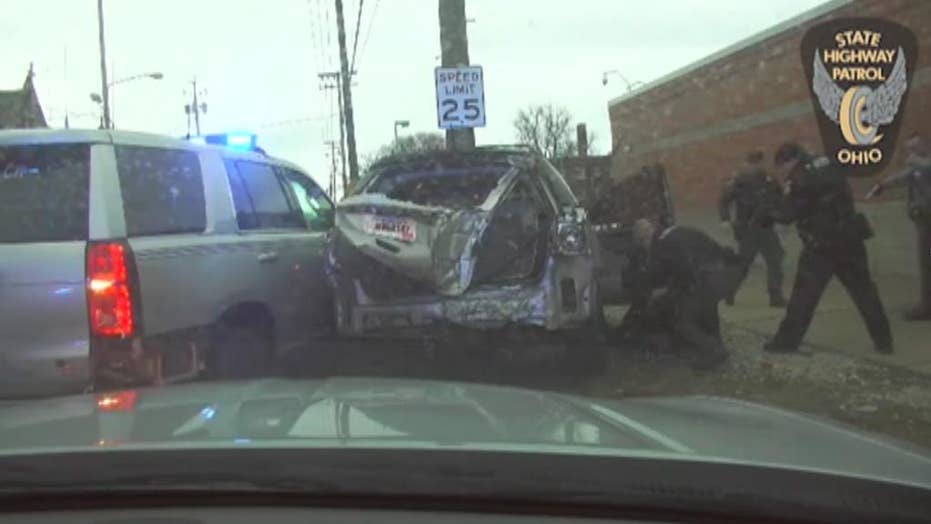 A woman who led cops in Ohio on a high-speed chase during rush hour last week that was captured on dashcam video and left 3 cruisers damaged claimed she kept going because she was late for work, according to police.

The Ohio State Highway Patrol said the incident began on Interstate 77 in Cuyahoga County around 6 p.m. after the woman drove off during an attempted traffic stop.

After authorities tried to box her in, the woman could be seen nearly striking an officer before crashing into two police cruisers and a highway patrol SUV before speeding away.

Video obtained by FOX8 shows the moment the chase later came to an end on the east side of Cleveland when a trooper used his vehicle to force the woman's car off the road, where it crashed into a utility pole.

After the woman was pulled from the vehicle, officers asked her why she made a run for it. She could then be heard telling officers she was "oh my way to work."

ARIZONA MAN, 23, KILLED AFTER HOMELESS MAN PUNCHES HIM IN FACE, CAUSING HIM TO FALL INTO ONCOMING TRAFFIC: POLICE

Despite 3 police cruisers getting hit during the chase, officials told FOX8 that no officers were injured.

The woman, who had not yet been identified, is expected to face several charges including felonious assault on a police officer for ramming into their police cruisers.