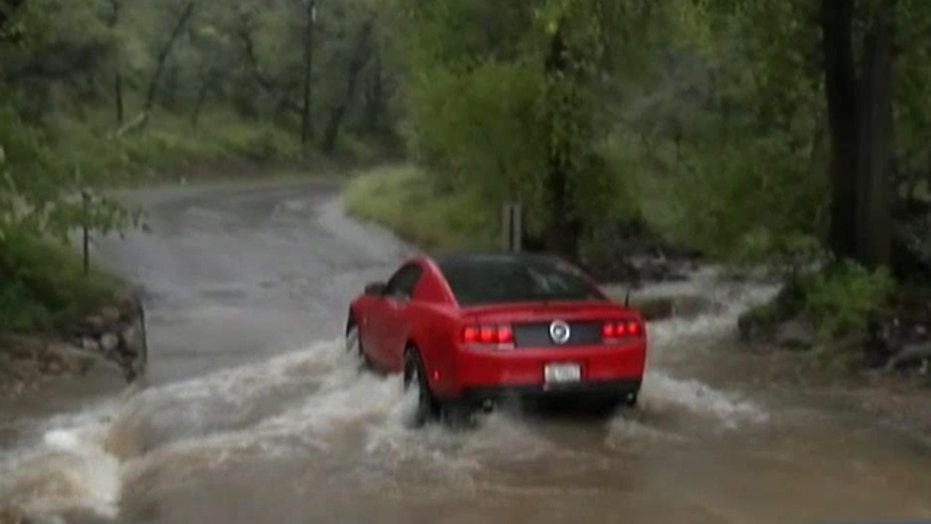 Will Carr reports from Tucson

The remnants of Hurricane Odile spared most parts of Arizona, but meteorologists are predicting heavy rainfall and dangerous flooding will hit parts of Texas and the Southern Plains.

There have been no reports of any deaths, but a Travis County Sheriff's deputy was missing after she called to say her patrol car was being swept away by the flooding waters. Authorities found her empty car submerged in water.

The flooding was expected to continue in Austin, with some parts seeing three to five inches of rain.

Catastrophic flooding had been anticipated in Tucson, Arizona, this week and local schools and universities announced that they might close in anticipation of the deluge.

But the remnants of the storm veered east, dropping only light showers over the metropolitan area. School continued as usual, with few road closures announced in the city.

Cities on the US-Mexico border saw intense rain activity. Nogales received about three inches of rain, while Bisbee received five inches. A major street in the city of Nogales flooded with several inches of water on Wednesday, causing authorities to cancel school for the next day.

New Mexico appeared the next target for the remnants of Odile.

Governor Susana Martinez said the state was opening the lines for financial and personnel support to flow from the state to local governments in event of flooding.

Meanwhile, another hurricane appeared to be gathering strength as it moved parallel to Mexico's Pacific coast.

According to the National Hurricane Center, Hurricane Polo is expected to gather strength before it eventually weakens this weekend.

Polo has shown winds up to 75 mph, and is currently moving northwest at 8 mph.

Mexico's Baja Peninsula, which includes the resort town of Los Cabos, was hit hard by Odile only days ago. Tourists and residents were left stranded after homes and hotels were leveled by strong rain and wind, with some visitors still waiting to board flights back to their home countries.