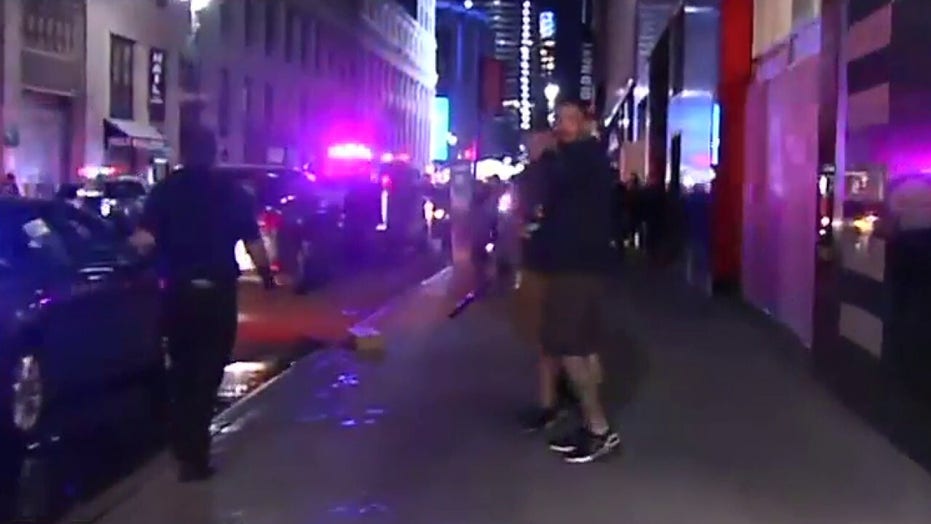 Bryan Llenas reports from the scene as police move in in Midtown Manhattan.

The NYPD revealed that it arrested hundreds of alleged looters over the past week, some of them nabbing high-end luxury items worth thousands of dollars.

June 1 marked the most active night of looting. More than 2,300 burglaries were reported compared to only a few hundred on the nights before and after, according to the New York Post.

NYPD said a crew of 15 to 20 allegedly made off with around $750,000 in pelts from family-owned furrier Henry Cowit.

Police told the Post that Julian Cepeda, 21, was caught inside the Dolce & Gabbana store wearing a $1,200 sweatshirt and a $435 pair of Chanel glasses. Hanaya Jones, 20, was found with $9,000 worth of handbags from Dior, according to NYPD.

People run out of a smoke shop that they broke into as police arrive on the scene on Monday, June 1, 2020, in New York. (AP Photo/Wong Maye-E)

Police are still searching for suspects in both cases.

While many alleged looters made off, police were able to arrest at least 75 suspects, with dozens of others brought in for questioning, according to the Post.

In some cases, suspects were found with the stolen items, and police were also able to make arrests, NYPD said.

People exit damaged stores after the glass was knocked out in the Chelsea neighborhood of New York, Monday, June 1, 2020. (AP Photo/Craig Ruttle)

Police said most of the suspected looters are from New York City and in their 20s, with only a few coming from out of state -- as far away as Virginia and North Carolina.

Most cases of looting occurred in Manhattan, with one case in Brooklyn, police said.

People carry merchandise out of a store that was broken into in New York, Monday, June 1, 2020. (AP Photo/Seth Wenig)

Many have taken to the streets to protest against police brutality and demand justice for George Floyd, who died May 25 while in police custody. While most of the protests have been peaceful, law enforcement and demonstrators have clashed at times.