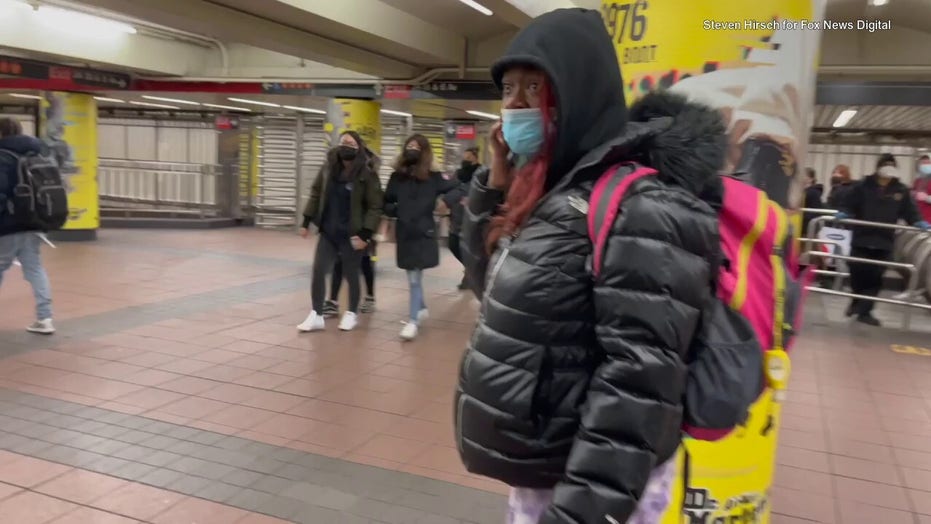 A video compilation showing a stream of people enter the subway through an exit gate or jump the turnstile at 34th Street-Herald Square station. Video credit: Steven Hirsch for Fox News Digital

Nearly 30% of New York City bus riders and 8% of subway users aren’t paying their fare — costing the city millions of dollars a year, according to new data released by the state-operated Metropolitan Transportation Authority.

A Fox News Digital videographer captured footage of waves of fare beaters in Midtown Manhattan climbing over turnstiles and streaming through an exit door — many in view of transit cops.

An MTA bus with a sign reading "MASKS REQUIRED." (iStock)

At least 50 people in one hour dodged the $2.75 fare Monday morning at the 34th Street-Herald Square station across the street from Macy’s flagship store.

In one instance, a man wearing a backpack strolled into the station through an exit door as a woman walked out. An officer can be heard confronting the man, "Why did you walk through the gate?"

"I got a better job than you, so yeah," the man shot back. 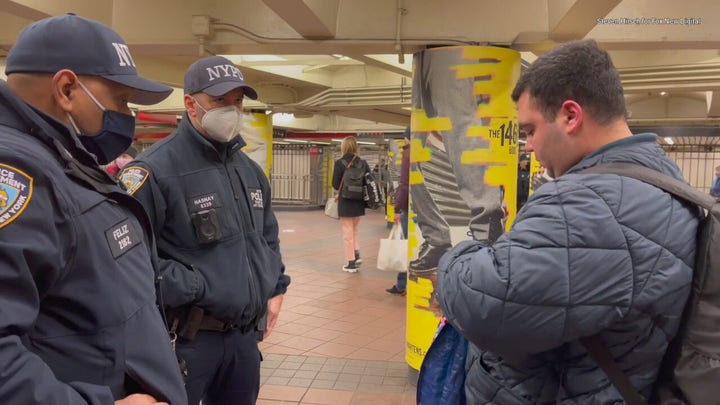 He was one of only three fare beaters who was stopped by cops at the station.

"By starving the public transportation system of funds, fare evasion is a crime against ordinary New Yorkers who pay their fare," MTA spokesman Aaron Donovan said. "That’s why the NYPD and NYC Transit deploy enforcement teams to combat bus and subway fare evasion on a daily basis. It’s easier to pay $2.75 than a $100 fine." 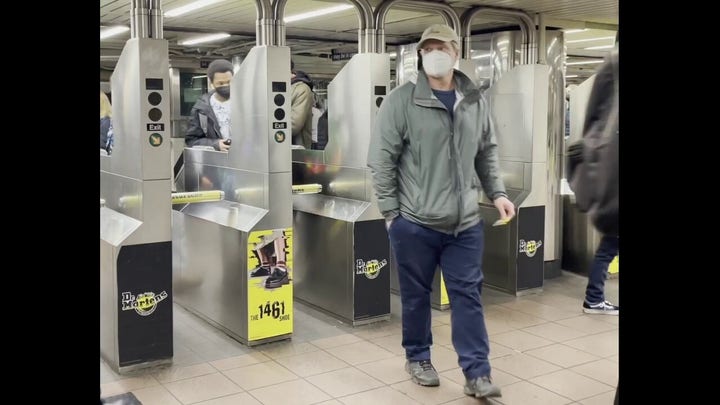 The MTA's report on fare evasion released this week is the latest blow to the troubled transportation system, which has seen soaring crime and rampant homelessness. Mayor Eric Adams, who took office in January, has acknowledged that many New Yorkers are afraid to take the subway and outlined a plan Friday to address the anarchy that has taken hold.

Fare beaters have cost the city an estimated $179 million in the last six months, according to the MTA’s latest report.

"If people don’t pay their fare, and other people see that, they say, ‘Why should I have to pay?’"

"This is a problem that can be contagious because if people don’t pay their fare, and other people see that, they say, ‘Why should I have to pay?’" said John Jay College professor Vincent Del Castillo, who was the city's transit chief from 1987 to 1990. He did warn against drawing conclusions based on conduct observed at a single station.

The MTA measures the number of subway fare evaders by dispatching a group of experts to discretely count the number of people who do not pay in a given hour at a particular station.

"They’re just estimating," said Del Castillo. "There is no way of measuring unless you actually have people there all the time."

On buses, the method is more streamlined. Automated passenger counters are installed on 43% of buses.

In the last three months of 2021, police issued about 28,000 tickets for violations of transit rules — including for dodging payment.

New York City's latest plan to tackle both crime and homelessness in subways was rolling into action Monday, Feb. 21, after police logged more than a half-dozen attacks in trains and stations over the holiday weekend.  (Associated Press)

Under former Mayor Ed Koch (1978-1989), plainclothes officers were assigned to stations that were known to have high levels of non-payment.

They would hand out tickets for a week or two and the fare evasion rate would plummet, Del Castillo said.

"It was very effective mainly because it interfered with people’s movement," he said. "Usually they’re in a hurry and want to get somewhere, and if they’re stopped and have to show their ID and get a summons, it delays them."

New York State Comptroller Thomas DiNapoli issued a scathing report in April 2021 on the MTA’s fare evasion crisis and the futile task force created to address it. Former New York Gov. Andrew Cuomo launched the joint NYPD-MTA task force 2019, but the expensive program had little impact, according to the report.

The total amount of unpaid fares jumped from $150 million in 2017 to more than $300 million in 2019. The MTA finance committee chairman said that progress was not being made and called the spike in revenue loss unsustainable, according to the audit.

Fare beating often goes hand in hand with criminality, according to some experts. Del Castillo said that in the 1980s, law enforcement noticed that people who were committing crimes in the subway generally had a history of fare evasion.

Major felonies on the city subway system were up 75.2% in January compared to the same month in 2021, with robbery spiking a whopping 137.5% and grand larceny 111.4%, according to public data. Subway arrests during the same period were up 24%.

In an unprovoked attack, Michelle Go, 40, was standing on the platform at the Times Square station Jan 15 when she was shoved in front of an R train and killed. Simon Martial, 61, who is homeless and suffers from mental illness, is charged with second-degree murder for her slaying.

"We hear it all the time," he said at Friday’s news conference. "I hear it every time I’m on the subway system – people tell me about their fear of using the system, and we’re going to ensure that fear is not New York’s reality."

The plan launched Monday on the heels of a violent weekend that saw six stabbings and two assaults.

Stephanie Pagones contributed to this report.