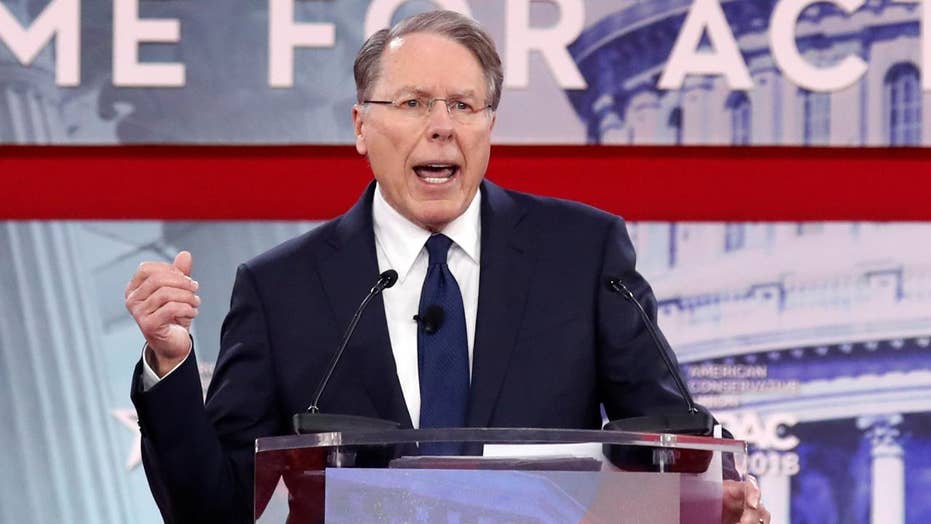 Wayne LaPierre, the executive vice president and public face of the National Rifle Association, claims the organization’s board president, Oliver North,  is trying to extort him into stepping down as the gun rights group faces infighting and turmoil in its ranks.

In a Thursday letter to NRA board members, LaPierre said North asked him to resign on Wednesday. North told LaPierre the NRA’s longtime advertising firm, Ackerman McQueen, planned to send a letter to the board through North that would be “bad for me” unless he resigned.

“Yesterday evening, I was forced to confront one of those defining choices — styled, in the parlance of extortionists — as an offer I couldn’t refuse,” the letter, which was obtained by the Wall Street Journal, read. “I refused it.”

He also wrote that North said “the letter would not be sent — if I were to abruptly resign,” adding, “He stated that he could ‘negotiate’ an ‘excellent retirement’ for me.”

A lawsuit filed by the NRA against Ackerman last month claims the company overbilled the group and that North had a conflict of interest because Ackerman paid him.

Oliver North was appointed president of the National Rifle Association in May 2018. (Associated Press)

LaPierre accused North of having “contractual and financial loyalties” to Ackerman.

“As you know, the N.R.A. has over this past year taken steps to strengthen its efforts to document and verify compliance by our vendors with our purchasing practices and their contracts,” LaPierre wrote in his letter on Thursday to the board. “We’ve met extraordinary resistance from one vendor — Ackerman McQueen.”

Prominent members of the NRA board had grown dismayed with Ackerman because of its NRATV service, the New York Times reported. They claimed it had dabbled in excessive content beyond straightforward advocacy for gun owners. North hosts an NRATV series called “American Heroes.”

On Thursday, North released a letter to the board saying he would appoint a special committee to investigate “allegations of financial misconduct related to Mr. LaPierre,” that have been made by Ackerman in the wake of the lawsuit, according to the Times.

Neither North or Ackerman responded to Fox News requests for comment late Friday.

North, 75, a retired U.S. Marine Corps lieutenant colonel, was appointed president of the NRA in May 2018. LaPierre, 69, has been in his current NRA role since 1991 after joining the organization in 1977.

LaPierre’s accusations come as the NRA battles outside forces that criticize its vigorous efforts to protect gun rights and turmoil and infighting within itself. The 5 million-member organization is currently hosting its annual convention in Indianapolis this weekend.