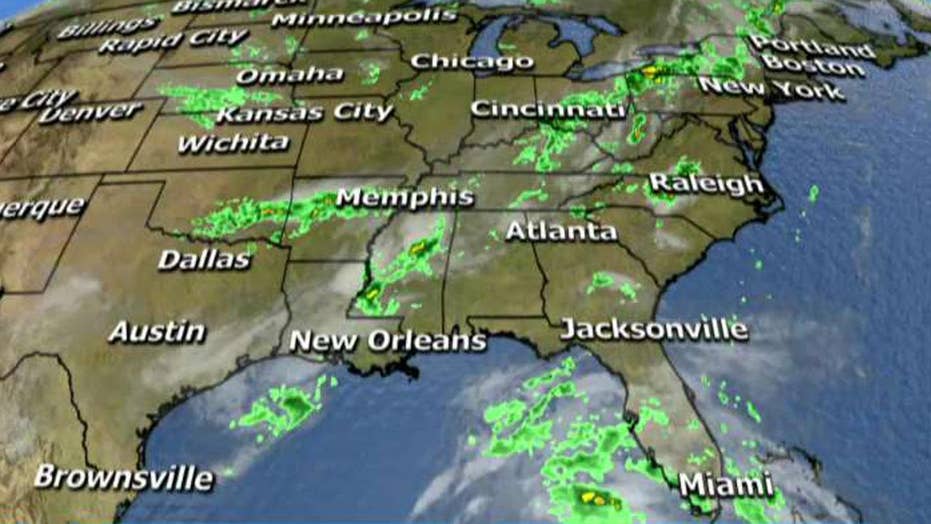 A large swath of the Northeast is bracing for damaging rains, wind gusts and hail Monday as a massive storm system is moving up the coast.

Hail the size of ping pong balls and wind gusts of up to 70 miles per hour were possible in parts of Connecticut, New Jersey and New York, Fox 5 reported.

The watches and warnings run until 8 p.m. ET in most areas.

Meanwhile, on the opposite side of the country, the Southwest is getting ready to feel the wrath of a punishing heat wave includes a forecast of 120 degrees in Phoenix — a temperature not seen in the desert city in more than 20 years, The Associated Press reported.

The broiling temperatures will also be felt in Las Vegas and Southern California, creating a public health hazard. Rising temps are being closely watched by everyone from airline pilots and emergency room doctors to power grid managers and mountain cities unaccustomed to heat waves.

Even cities accustomed to dealing with 110-degree days are grappling with the new problems that arise from 120 degrees.

Wunderground Weather Historian Christopher C. Burt said Phoenix temperatures rose to 120 degrees and above only three times in recorded history — twice in 1990 and once in 1995.

It could be worse: Death Valley could see 124 degrees on Tuesday.

When the temperature soars, it's harder for airplanes to take off.

American Airlines pilot Shane Coffey said extreme heat creates changes in the air density that make it harder for airplanes to take off, meaning pilots have to use more thrust or impose weight restrictions such as flying with less cargo.

In 1990, amid a similar heat wave, flights were cancelled at the Phoenix airport because there was too much uncertainty about how the heat would affect aviation performance. Now, airlines have a better understanding, but the heat is still a concern — primarily for smaller, regional jets.

Airlines will be closely monitoring the heat this week and some flights could be affected.

American Airlines said Monday that it will allow Phoenix passengers flying during the peak heat Monday through Wednesday to change flights without a fee.

One of the ways the body cools itself is by radiating heat through the skin into the air, but that system reverses when external temperatures climb to 110 or higher.

"When that happens we have to rely on our second mechanism, which is sweating," Bhow said. Sweat makes your skin feel cooler and some heat is removed as it evaporates.

He noted staying hydrated is crucial to perspiring and staying cool.

A sign warns hikers about severe heat as they begin their hike at sunrise to avoid the excessive heat, Friday, June 16, 2017, in Phoenix. (AP Photo/Matt York)