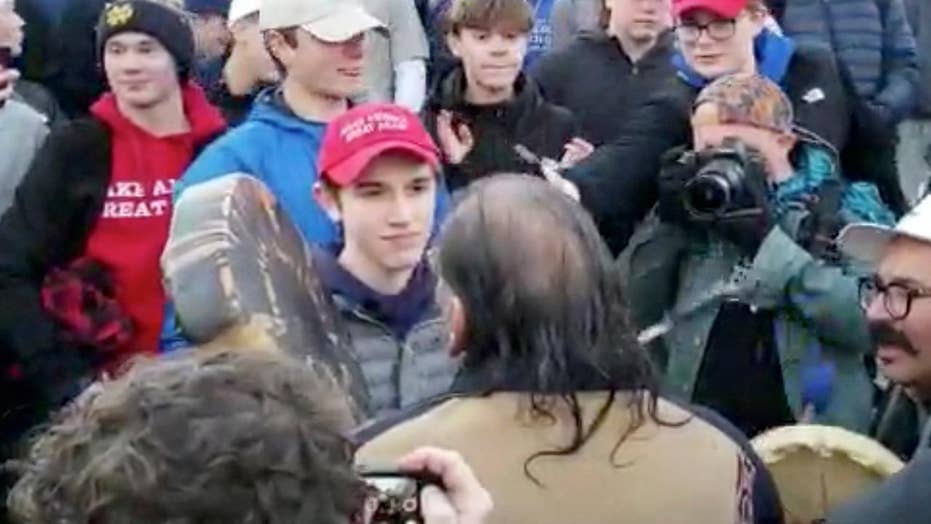 The new ruling, by District Judge William O. Bertelsman, is based on an amended complaint filed by Sandmann's legal team. The decision permitted Sandmann to obtain documents from The Post during an upcoming discovery process, as his lawyers have sought to argue that the paper negligently covered Sandmann's interactions with a Native American man, Nathan Phillips, while the student wore a red "Make America Great Again" hat and stood outside the Lincoln Memorial in January.

"The ruling bodes well for the NBC and CNN cases, as well," Todd V. McMurtry, one of the lawyers for the Sandmann family, tweeted, referring to other outstanding lawsuits concerning those outlets' coverage of the episode.

Sandmann was one of a group of Covington students from Park Hills, Ky.,  attending an anti-abortion March for Life in Washington, D.C. Phillips was attending the Indigenous Peoples' March on the same day.

Videos documenting Sandmann's encounter with Phillips went viral -- including some clips that did not show the full incident. Incomplete video clips posted online prompted widespread accusations that Sandmann was a racist who had approached Phillips and mocked him; the Diocese of Covington and Covington Catholic High School quickly condemned Sandmann's behavior and vowed discipline.

Within days, though, more complete footage from the day showed several members of the Black Hebrew Israelites, a fringe religious group, heckling Sandmann and his classmates with homophobic and racist language.

Then, Philips could be seen approaching Sandmann and banging a drum just inches from his face, while Sandmann stared ahead.

Judge Bertelsman's ruling specifically concerned reporting by The Post, citing claims by Phillips that Sandmann had "blocked" him and "would not allow him to retreat."

The judge ruled that an amended complaint submitted by Sandmann's attorneys "alleged in greater detail than the original complaint that Phillips deliberately lied concerning the events at issue, and that Phillips had "an unsavory reputation which, but for the defendant’s negligence or malice, would have alerted defendant to this fact."

The judge noted that the new complaint "also alleges that [Sandmann] could be identified as the subject of [Phillips' statements] by reason of certain photographs of [Sandmann] and the videos" of the episode.

In a 36-page ruling in July that dismissed all of Sandmann's claims based on his initial complaint, Judge Bertelsman said that The Post never mentioned Sandmann by name in its initial coverage of the incident, referring only to groups of "hat-wearing teens." The judge maintained that "the words used contain no reflection upon any particular individual" and thus could not be constituted as defamation.

Thirty other statements reported by The Post that Sandmann alleged to have been defamatory are not covered by the reconsidered ruling, and they remained dismissed.

"Nicholas Sandmann deserves his day in court against WaPo. Now he will get it."

The lawsuit had also claimed The Post falsely labeled Sandmann a racist by publishing articles that "falsely accused Nicholas of ... 'accost[ing]' Phillips by 'suddenly swarm[ing]' him in a 'threaten[ing]' and 'physically intimidat[ing]' manner ... 'taunting the dispersing indigenous crowd,' [and] chanting, 'Build that wall,' 'Trump2020,' or 'Go back to Africa.'" (The judge ruled that the newspaper used language that was "loose, figurative," and "rhetorical hyperbole" which is protected by the First Amendment.)

But, Judge Bertelsman said in his new ruling, discovery should be undertaken concerning the "context" of the claims that Sandmann had blocked Phillipps. After discovery, the judge could make a summary-judgment ruling -- or send the case to trial.

In a statement to The Washington Times, McMurty said the ruling "preserves the heart of Nicholas Sandmann’s claims."