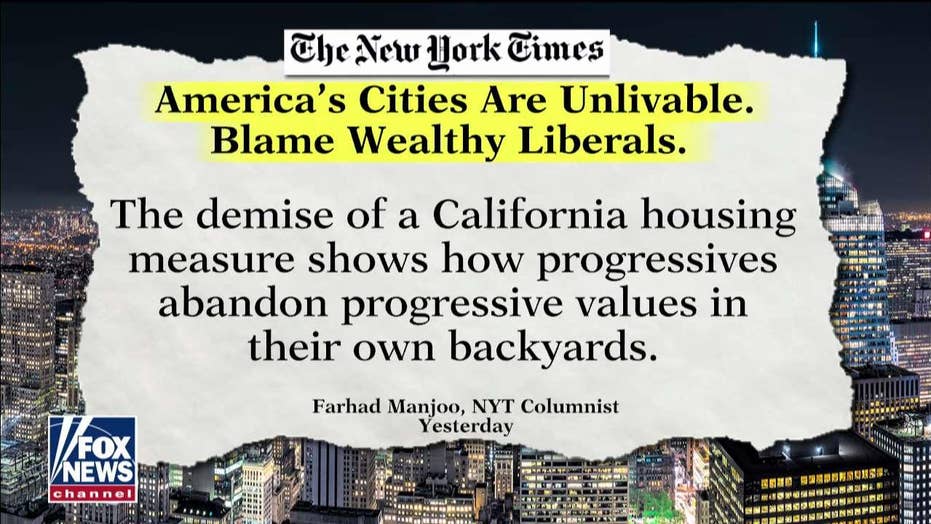 A New York Times opinion piece is calling attention to the "unlivable" conditions in many American cities, including House Speaker Nancy Pelosi's hometown of San Francisco.&nbsp;

A New York Times opinion piece is calling attention to the "unlivable" conditions in many American cities, including House Speaker Nancy Pelosi's hometown of San Francisco.

"To live in California at this time is to experience every day the cryptic phrase that George W. Bush once used to describe the invasion of Iraq: “Catastrophic success.” The economy here is booming, but no one feels especially good about it. When the cost of living is taken into account, billionaire-brimming California ranks as the most poverty-stricken state, with a fifth of the population struggling to get by. Since 2010, migration out of California has surged," he explained.

BAY AREA HAS THIRD-LARGEST HOMELESS POPULATION IN US, REPORT FINDS

In San Francisco, Manjoo contrasted the homelessness epidemic with the fact that one of every 11,600 residents is a billionaire and "the annual household income necessary to buy a median-priced home now tops $320,000."

Manjoo went on to explain how a bill to expand affordable housing failed to move forward despite support from "a diverse coalition of business and advocacy groups."

"Then you have billionaires that say, 'we don't want a homeless shelter in our neighborhood. We want you to deal with the homeless, but can you ship them over to Pleasanton or the East Bay,'" she explained.

Democrat Mo Elleithee said on the show that the issue goes beyond partisan politics and there is a growing problem of cities thriving economically, but becoming "less livable" for lower-income residents at the same time.