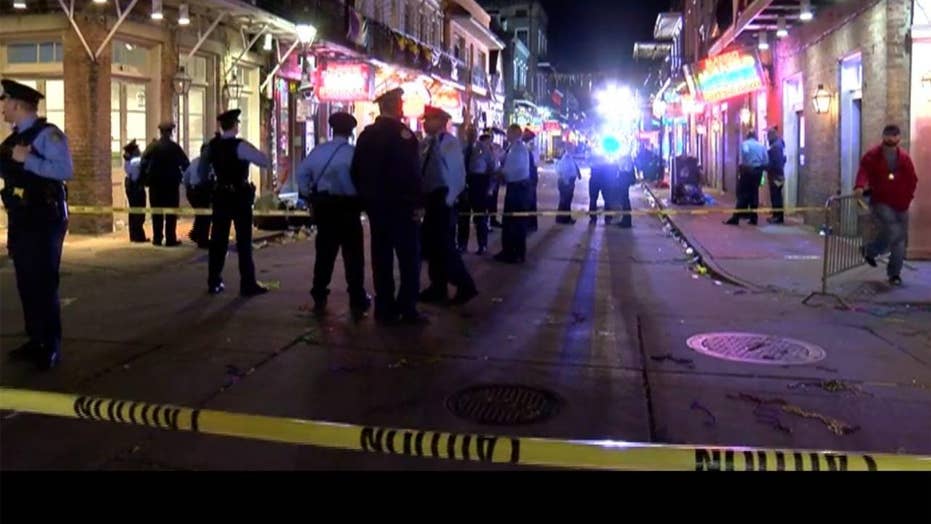 One woman was killed and two others were injured after a man being removed from a restaurant along New Orleans' famed Bourbon Street took a security guard's gun and started firing early Sunday, officials said.

New Orleans Police Chief Shaun Ferguson said at a news conference the shooting happened around 3:15 a.m. after a security guard was trying to remove a man from Willie's Chicken Shack when the man somehow took the guard's weapon.

The man then opened fire, striking the security guard in the neck and a 36-year-old woman was walking down Bourbon Street at the time. She was taken to University Medical Center where she was pronounced dead, according to Ferguson.

“This will not be accepted,” the police chief told reporters.

The suspected shooter was also shot in the shoulder during the struggle over the weapon before he was eventually arrested, police said.

Sandy Dalon, who was working as a door girl at Big Daddy’s bar, told NOLA.com she saw a crowd of 50 or 60 people stampeding trying to find open bars or businesses to get inside after gunfire brought out.

“They were running, screaming,” she told the news outlet. “They knew there was gunfire and they were trying to get away from it.”

The shooting on New Orlean's famed Bourbon Street set people running for cover in nearby bars and restaurants. (FOX8)

Another man walking down Bourbon Street was also injured in the stampede after the initial shooting, police said. Ferguson said that eight officers nearby heard shots fired and responded immediately to "contain the scene."

Police have not released the identity of the woman who was killed. Once an autopsy is completed and the victim’s family is notified, the Orleans Parish Coroner’s Office will release the victim’s name along with an official cause of death, FOX8 reported.

Since Friday, Ferguson said that seven guns have been confiscated during arrests on Bourbon Street. The chief urged people to leave their weapons at home as celebrations rev up as part of Mardi Gras season.

"Do not bring guns out here on Bourbon Street," he told reporters. "Please be responsible while you're out here."