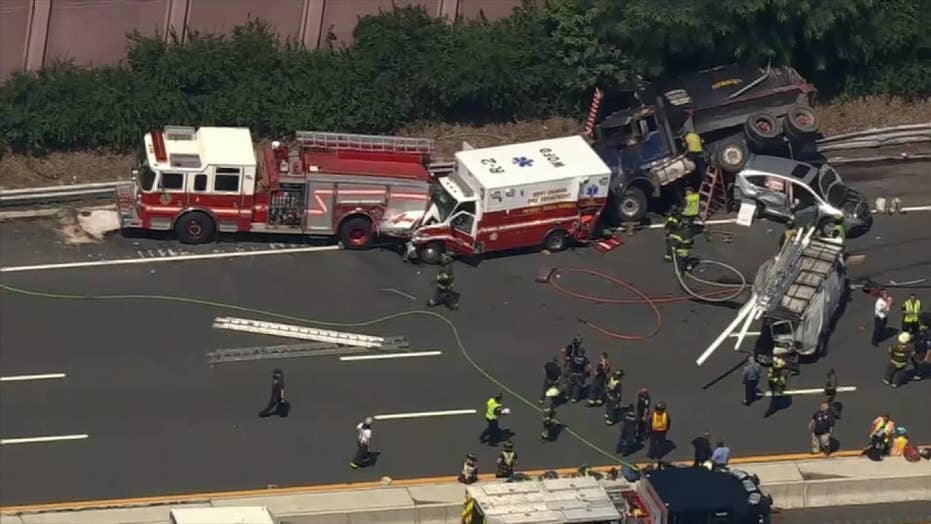 Both troopers and the pedestrians were outside their vehicles at the scene of a separate car accident, they have been transported to a nearby hospital.

Two New Jersey state troopers were hospitalized Tuesday after they were hit by a dump truck on an interstate highway where they were investigating a crash — an accident that seemingly led to a multi-vehicle pile-up that included an ambulance and fire truck.

The troopers were struck around 10:20 a.m. on Interstate 280 in West Orange, State Police posted online. The pair was responding to an accident when a truck struck them as they were standing "outside of their patrol cars," officials said.

A total of 12 vehicles were reportedly involved in a massive wreck on Interstate 280 in New Jersey on Tuesday. (WNYW)

"Multiple pedestrians" were also hit, but none were reported to have serious injuries, according to state investigators, who said to expect delays on I-280.

All highway lanes were closed as authorities responded to the scene. Aerial footage showed at least a half-dozen vehicles — including an ambulance, a fire truck, and a New Jersey State Police SUV — involved in the wreck.

Images from the scene showed the dump truck tipped over on its side and lodged atop a gray minivan that was involved in the crash. A total of 12 vehicles, including a food truck, appeared to be involved in the accident, according to Fox affiliate WNYW.

Further information on the crash — including a more precise timeline of the chain of events — was not immediately available.