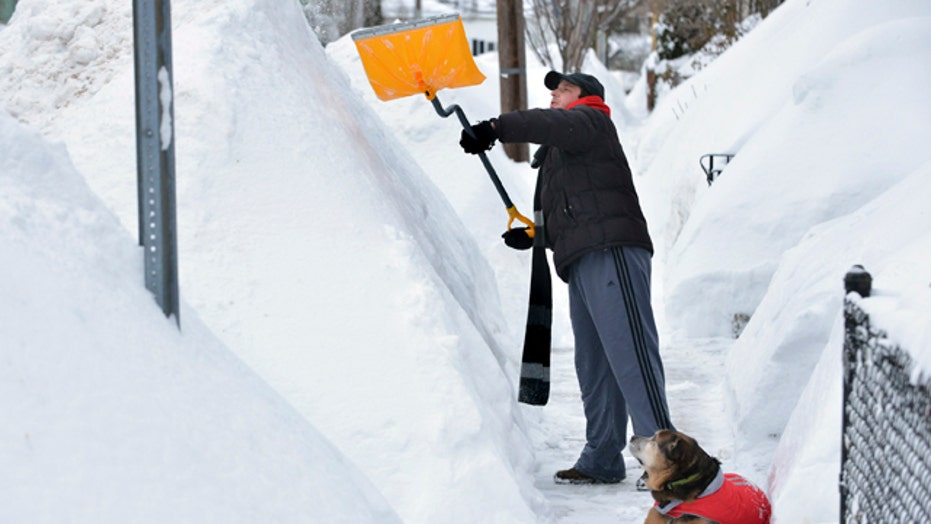 More than 2 feet of snow piled up in parts of New England by early Tuesday, breaking records set 37 years ago as forecasters warned still more winter weather was on the way.

Schools to the north of Boston have closed until Feb. 23 and forecasters warned that more snow was expected Thursday and again next weekend. The Massachusetts Emergency Management Agency said that potentially record-low temperatures and wind chills are expected later in the week.

Gov. Charlie Baker announced Tuesday that he will deploy 500 National Guardsmen to assist with the clean-up efforts.

"I'm frustrated. The last thing I want to be talking about is another 24 inches of snow. I want to move on to something else," Boston Mayor Marty Walsh said at City Hall.

The region continues to clean up, but there is no place to move the latest snowfall. After a more than 24-hour shutdown, Massachusetts Bay Transportation Authority announced Tuesday afternoon that subways, trolleys and commuter rail will resume on Wednesday. But officials say commuters should expect fewer cars and less frequent service on most lines.

The buildup of snow and ice on trolley tracks combined with aging equipment has stalled trains, delaying and angering commuters. A frustrated Massachusetts Gov. Charlie Baker called the situation "unacceptable."

Boston hospitals have set up sleeping areas for workers and police are offering rides to work for doctors and nurses.

There have been reports of roofs collapsing in the Boston area due the weight of the snow, including at a music store where a $500,000 rhinestone-covered grand piano once owned by Liberace was spared after the store's roof gave way under the weight of snow.

Most schools remain closed, and Pentucket school district north of Boston has closed all schools for the week over concerns about strained roofs.

As of late Monday, the fight tracking website FlightAware.com said that over 2,600 flights had been canceled that day, with 573 either originating from or heading to Boston's Logan Airport.

The National Weather Service issued winter storm warnings for central New York, the western Catskills and much of New England through early Tuesday. In New York, the snow stretched from Buffalo to the Hudson Valley, one day after 6 inches of snow fell on parts of the upstate region.

Across a broad swath of upstate New York, the weather service said as much as 9 to 18 inches of snow was expected from the Catskills to the southern Adirondacks by the time the storm moved out early Tuesday.

Court closings Monday meant another weather-related delay in jury selection in the Boston Marathon bombing trial and in the murder trial in Fall River of former NFL star Aaron Hernandez.

Carrie Sullivan, a manager at Uncle Charlie's Finer Diner in Weymouth, Mass., said she needed four men and a Jeep to dislodge her car from piles of snow in her driveway early Monday. When she finally got to work two hours later, the diner was filled with plow drivers and electric company crews.

"They were pretty much walking around like zombies. They've been working for 20 hours straight," she said. "I think we'd all like to get a little bit back to normal," she said. "For now, we'll just keep bringing the coffee and the hot pancakes."

In northwestern Pennsylvania, a winter weather advisory remains in effect until 1 a.m. Tuesday. Forecasters predict 2-5 inches of snow and up to a quarter-inch of ice accumulation from Bradford County to the Poconos.

In many New England communities, the obvious problem is where to put the new snowfall.

"I don't know what we're going to do yet," Lombari said. "It's tough trying to find a place that meets all the proper (environmental) criteria."

The steady run of winter blasts has already sucked up more than 70 percent of New Hampshire's Department of Transportation winter maintenance budget. Rhode Island, too, said Monday's storm will use up what's left of its $14 million budget for snow removal and nearly the entire salt stockpile.

The small college town of Henniker, which lost its fleet of plows in a fire Jan. 30, was using plows on loan from the state. DOT spokesman Bill Boynton said the three back-up trucks would probably remain with the town throughout the winter.
While the snow is welcome at New England ski resorts, it's a headache for some businesses.

But not everyone was dreading the next blast of winter.

Business was brisk at Charles Street Supply hardware in Boston, where owner Jack Gurnon sells shovels, salt and sleds. He drove to Portland, Maine, to stock up so he'd be able to meet demand when the storm hits full force.

"We actually have a lot of supply right now, and we're lucky because the big box stores, they're scrambling around, and I'm sitting on a whole bunch right now," Gurnon told the AP.

But an increase in sales isn't all he is looking forward to. "I also love to ski, so as soon as this next mess is over with, I'm taking off and going north," he said.