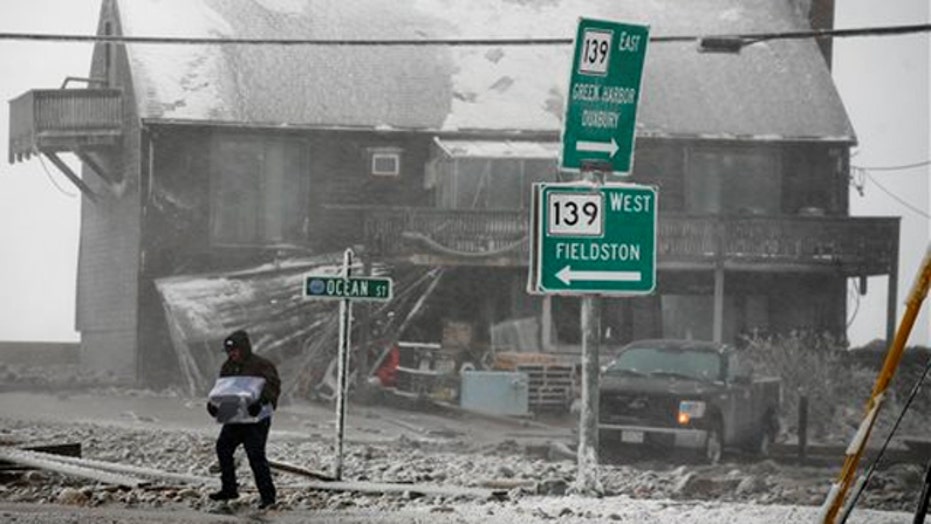 New Englanders began to clean up and dig out Wednesday after a blizzard slammed the region with close to 3 feet of snow in some places, as well as high winds that caused power outages and toppled seawalls.

Massachusetts Gov. Charlie Baker lifted the state's travel ban at midnight Wednesday and service on Boston's MBTA transit system was set to resume on a modified schedule. Flights were to resume at dawn Wednesday at Logan International Airport, among the nation's busiest air hubs, and Boston's public transit and Amtrak trains to New York and Washington were set to roll again.

However, bitter cold threatens to complicate efforts to clear clogged streets and restore power to more than 15,000 customers -- including the entire island of Nantucket -- shivering in the dark, about half as many who lost electricity at the height of the storm. Forecasters have called for high temperatures to remain below freezing for the rest of the week. The low in Boston Wednesday was expected to be 10 degrees, with a windchill of minus 5.

Boston Mayor Marty Walsh said he would maintain driving and street parking bans until further notice and warned that city schools may be closed on Thursday as well as Wednesday, depending on how cleanup goes. Walsh said he hoped that major roads in the city would be cleared Wednesday morning so the snow emergency could be lifted later in the day.

When asked about the contentious Boston tradition of saving a parking space you have shoveled, Walsh responded, "If you spent 10 hours shoveling it out, it's yours for a couple of days."

Nearly 21 inches of snow coated Boston's Logan Airport late Tuesday while nearby Framingham had 31.5 inches by mid-afternoon. Worcester, in central Massachusetts, was blanketed with 33.5 inches, the most since record-keeping began in 1905, while Lunenburg reported 33 inches.

Farther afield, Providence, R.I., had well over a foot of snow. Sixteen inches had piled up in Portland, Maine, and 23 inches in Waterford, Conn. Montauk, on the eastern end of Long Island, got about 2 feet.

The blizzard's force and relentlessness stunned even winter-hardened New Englanders.

"It's a wicked storm," Jeff Russell said as he fought a mounting snowdrift threatening to cover a window at his home in Scarborough, Maine.

"It felt like sand hitting you in the face," Bob Paglia said after walking his dog in Whitman, a small town about 20 miles south of Boston. A 78 mph wind gust was reported on Nantucket, and a 72 mph one on neighboring Martha's Vineyard.

Around New England, snowplows struggled to keep up, and Boston police drove several dozen doctors and nurses to work at hospitals. Snow blanketed Boston Common, where the Redcoats drilled during the Revolution, and drifts piled up against Faneuil Hall, where Samuel Adams and the Sons of Liberty stoked the fires of rebellion.

In Marshfield, Mass., on the state's South Shore, the storm knocked out a 40- to 50-foot section of seawall, damaging 11 homes and knocking two others off their foundations. Massachusetts state Rep. Jim Cantwell told WFXT that as many as 100 more homes may be at risk. Baker was scheduled to visit Marshfield and nearby Scituate Wednesday to survey the damage.

In Scituate, the Massachusetts Army National Guard dispatched teams of trucks to assist in evacuation efforts as flooding hit the town. In Rhode Island, A Revolutionary War replica tall ship was toppled by strong wind gusts. Owner and captain Thorpe Leeson said the mast is broken and the hull is punctured, but he planned to get the ship back in the water by summer.

Kelly Arias, a waitress at Cindy's Diner in the town, was taking breakfast orders Wednesday morning at the crowded restaurant.

"It's bad, but people are out-and-about," she told FoxNews.com.

Nantucket Cottage Hospital took precautions in the days leading up to the storm. When the storm struck, the hospital's generator kicked in and there were no recorded heart attacks or traumas in the area during the storm, Jason Graziadei, the public information officer said.

The hospital delivered two babies and offered pregnant women the opportunity to stay the night rather than contend with the road conditions.

Meanwhile, forecasters scrambled to explain how a blizzard predicted to dump at least 2 feet of snow on New York City and a 18 inches on Philadelphia earlier this week spared both metropolises.

In a conference call Tuesday, National Weather Service Director Louis Uccellini wouldn't say his agency's forecast was wrong. Instead, he blamed the way meteorologists communicated and said the weather service needs to do a better job addressing uncertainty.

Private meteorologist Ryan Maue of Weather Bell Analytics slammed the public agency for ratcheting up forecast storm amounts before the system arrived, instead of telling people how uncertain it was.

"The public should be upset that the forecast was blown for NYC and ask for answers," he said in an email.

Uccellini said the agency would review those procedures and consult with social scientists to improve messaging.

But Uccellini said he'd rather warn too much and be wrong, than not warn enough. He said the weather service's predictions and citywide closures that they prompted made for a faster recovery.

"This was the right forecast decision to make," Uccellini said.

Meteorologists say the nor'easter strayed about 75 to 100 miles east of its predicted track, which meant the western edge — New York and New Jersey — got 10 inches less than forecasted.