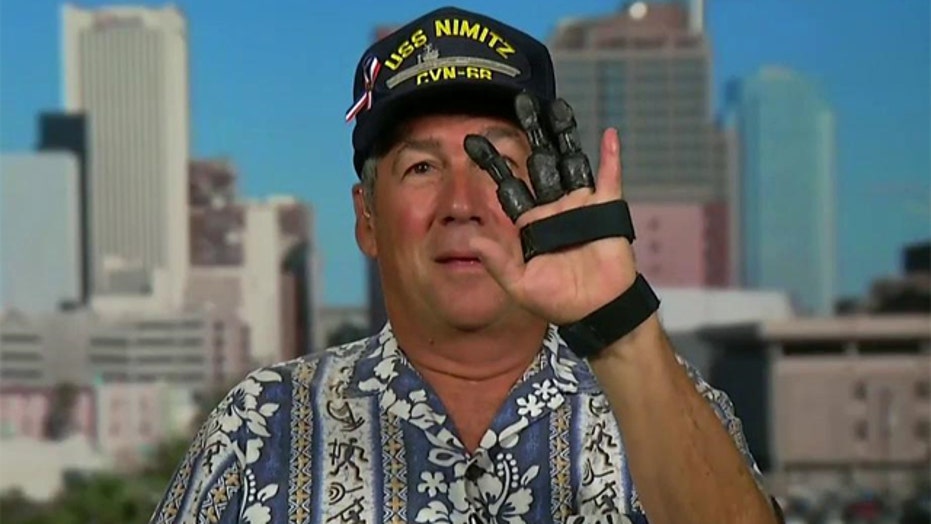 Navy vet creates his own prosthetic

The 57-year-old Navy vet was working with a miter saw in his Phoenix home, when a slip mangled four fingers on his left hand. Surgeons at the Banner Good Samaritan Medical Center were able to save his pinkie, but three fingers had to be amputated.

Kamarata's situation is not uncommon. According to the CDC and Prevention's National Center for Injury Prevention and Control, 41,000 people a year suffer injuries that lead to amputations of one or more fingers.

Faced with the high cost of prosthetic replacements, Kamarata's livelihood as a pipe fitter and handyman were in jeopardy. Until a chance encounter with industrial designer Casey Barrett.

Barrett was able to source prosthetic designs on the Internet and, using a 3D printer and materials purchased at Home Depot, fashioned a custom-made hand.

Appearing on "Fox & Friends" on Wednesday morning, Kamarata demonstrated his dexterity -- carefully gripping a plastic water bottle and playing cards. Not bad for hand made from "a glove, some string and some fishing line."

But Kamarata and Barrett aren't looking to cash in on their design. They have teamed with the RecFX Foundation to "give it away to veterans who have lost their hands and their fingers and anybody else who needs help because prosthetics are very expensive."